"The Citroen C3 has low running costs and a practical interior, and thanks to its soft suspension it’s one of the most comfortable superminis on the market."

The Citroen C3 is a hatchback in the highly competitive supermini class that prioritises comfort in order to appeal to drivers who are more interested in smooth journeys around potholed, patchy city streets than handling prowess on twisty country roads. This is in contrast to the big rivals in this class, such as the Volkswagen Polo, Ford Fiesta, Vauxhall Corsa and Hyundai i20, which try to be the best possible all-rounders. Citroen’s approach also means that the C3 is actually a very good motorway cruiser once you get up to speed.

This setup has its downsides, the main one being that alternatives such as the Polo and Fiesta are much more fun to drive. Those cars may have firmer rides, and poor road surfaces may be more noticeable for their occupants, but they also pitch and roll a lot less in corners than the C3. The Citroen’s body lean brings it’s own brand of discomfort, even if it’s the result of a setup that insulates the car’s interior from another.

While not the best in class to drive, the C3 is very practical; all models have five doors and are spacious inside. The C3 is easy to get in and out of and has a relatively large boot, which opens up to a particularly impressive size when you fold the rear seats down.

The C3 is available with three petrol and two diesel engines. All the petrol options have three-cylinders and are capable of at least 60mpg, while the two diesels can top 80mpg. If you’ll only use the car for short trips around town, then the 1.2-litre PureTEch 110 petrol is the best mix of performance and economy, while those envisaging frequent motorway trips should opt for the 1.6-litre 100 diesel engine. 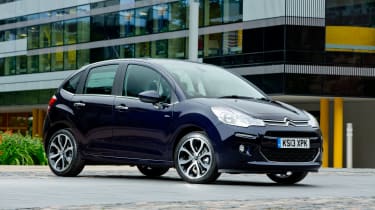 Three trim levels are offered to C3 buyers, ranging from entry-level VT, to mid-range Edition and lastly the top-spec Platinum trim. Frustratingly, the best engines are only available if you go for the Platinum trim, so you have to spend more than you’d think to get the best petrol and diesel options. If you’re considering an entry-level model, you’ll have to be satisfied with the entry-level engines.

As you’d expect from the basic model, standard equipment doesn’t stretch much further than electric windows and mirrors, and split-folding rear seats and a radio/CD player with MP3 compatibility.

Citroen as a brand has performed less than brilliantly in our most recent Driver Power satisfaction surveys, falling from 20th to 26th in 2016 out of 32 manufacturers. The C3 itself came a rather average 113th out of 200 cars in 2016, though that was an improvement on the previous year.

The C3 only managed four out of a possible five stars when it was crash tested by Euro NCAP. The entry-level model has ABS, electronic stability control and a tyre-pressure monitoring system but testers were critical of the lack of curtain airbags.

This generation of Citroen C3 has been replaced by an all-new model. We've reviewed it in full.