The Hyundai Santa Fe diesel isn't the most economical, but it's relatively cheap to own

The Hyundai Santa Fe is big enough to seat seven people and has a reasonably large engine, so running costs are never going to be particularly low. Although the Nissan X-Trail is more efficient, that’s largely due to the fact it has a smaller diesel engine, so there’s a trade-off in performance.

Hyundai has done the best it can to make the only engine in the Santa Fe range as economical as possible, so models with the manual gearbox are not only greener but also quicker than before. The car isn’t hugely expensive to insure given the power on offer and Hyundai’s five-year warranty makes it an even more appealing proposition.

There's only one engine available in the Hyundai Santa Fe: a 2.2-litre diesel. Hyundai has made the car more economical by fitting a 'Torque On Demand' four-wheel-drive system, which only sends power to all four wheels when it senses a lack of grip. This means that most of the time the engine is only driving two wheels, which saves fuel. 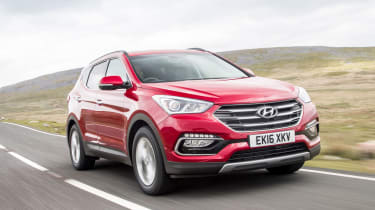 If you go for the six-speed manual gearbox, the car will return 46.3mpg fuel economy and has CO2 emissions of 161g/km. The latter figure means the Santa Fe costs £185 a year to tax if registered before April 2017. Choosing the six-speed automatic gearbox means a small sacrifice in efficiency – fuel economy drops to 42.2mpg and CO2 emissions go up to 177g/km for a higher annual tax bill of £230 at current rates.

In comparison, the current Nissan X-Trail can return 57.6mpg and has CO2 emissions of 129g/km. However, the Hyundai is quicker, a better performer off-road and can tow 2,500kg (when ordered with the manual gearbox) compared to the Nissan’s 2,000kg limit.

All Hyundai Santa Fe models fall into group  27 for insurance (out of 50), except for the top-spec Premium SE car, which is rated in group 28.

The five-year plan costs £799 and includes the yearly health checks, three interim services and a full service in year two or after 20,000 miles and in year four or after 40,000 miles – again depending on whichever comes first.

Hyundai is one of the best manufacturers in the business when it comes to warranty cover, guaranteeing its cars for five years and an unlimited number of miles. This compares very favourably to Nissan, which only offers a three-year warranty on the X-Trail that's limited to 60,000 miles.