"The Hyundai Santa Fe is a pretty stylish seven-seater SUV that’s big and practical inside, but also quite expensive to buy"

A flagship model for its brand, the Hyundai Santa Fe is a full-sized SUV with enough room for seven occupants, lots of equipment and a decent serving of luxury – although all this does come at a price.

That seven-seat status is one of the Santa Fe’s main selling points, because most similarly sized rivals like the Audi Q5 and BMW X3 only come with five seats, although the Hyundai does have other rivals in the shape of the desirable seven-seat Land Rover Discovery Sport, along with the Nissan X-Trail and Kia Sorento, which actually shares quite a bit with the Santa Fe under the metal.

There are just two trim levels, called Premium and Premium SE, with even the ‘entry-level’ model getting leather upholstery, 18-inch wheels, Bluetooth, sat nav, front and rear parking sensors and a reversing camera to name just a few of its features. Premium SE gets luxury items like a panoramic sunroof, heated steering wheel, lane-departure warning and a powered tailgate, but also costs around £3,000 more.

This version of the Santa Fe is due for replacement in the coming months. 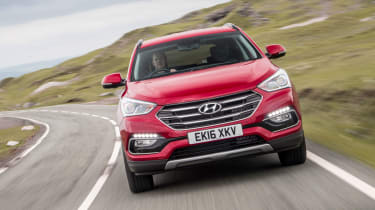 Like the Sorento, the Santa Fe only comes with one engine, but we aren’t complaining, because this 2.2-litre diesel with 197bhp is ideally suited to the car. It can get the big Hyundai from 0-62mph in a respectable nine seconds, but while its 46.3mpg economy looks reasonable in isolation, the Discovery Sport has moved the game on and can get 57mpg, while also being cheaper to tax. The Santa Fe has a six-speed manual gearbox or an optional automatic, which suits the relaxed road manners of this SUV, but also dents its performance and efficiency figures a little.

Get behind the wheel and the Santa Fe is great if you want a comfortable, relaxed SUV, but won’t tick all the boxes if you expect your seven-seater to handle like a performance saloon car. The steering is quite vague and even if body lean is fairly well mitigated, you’re always aware this is a big, heavy vehicle, so it’s best suited to cruising along at a gentle pace.

Passengers will appreciate the spacious front and rear seats on longer trips, while the third row of seats is really just for kids (or adults in a pinch) and can be tricky to access if you aren’t flexible. The interior design is reasonable, but is starting to feel slightly dated, even compared to Hyundai’s latest models, which is a shame given the fact it’s one of the most expensive cars in the company’s line-up.

The Santa Fe didn’t feature in our 2016 Driver Power customer satisfaction survey, but it’s reassuring to know it comes with a five-year/unlimited-mileage warranty and has a five-star Euro NCAP crash-test score.