The Jaguar XF Sportbrake’s 2.2-litre diesel is all you’ll need, but the 3.0-litre version is smoother

The Sportbrake's handling is focused more on a comfortable ride than a sporty feel, so none of the controls are particularly sensitive and the steering wheel doesn't wriggle about in your hands as you drive over bumps. The ride is very comfortable, as the Sportbrake is more about luxury than sportiness.

With that in mind, we think the BMW 5 Series Touring is more fun and better suited to keen drivers, as it has a sharper response to steering inputs and the suspension setup is aimed at better performance in corners. The XF Sportbrake isn’t far behind, however, with a particularly fluid feeling from one corner to the next and an impressive ability to shrug off poor road surfaces. 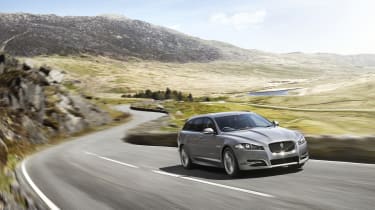 For those who desire a more extreme school-run or family holiday, the XFR-S Sportbrake is blisteringly quick. The bigger brakes and stiffer suspension compared to the standard car ensure the performance estate still handles well in spite of its size.

We maintain that the 197bhp version of the 2.2-litre diesel is all the engine that most buyers will need. The larger 3.0-litre V6 diesel is smoother on the move, however.

We don't think most buyers will need to venture beyond the 2.2-litre diesel engine, which comes with either 161 or 197bhp. The latter model is as fast as you'll ever really need in the real world, as it does 0-62mph in 8.2 seconds. The less powerful version does sometimes feel a bit slow, especially if you have a heavy load on board.

The 3.0-litre V6 diesel is significantly faster and while the 2.2-litre engines can be intrusively noisy and rattly when you accelerate hard, the V6 always stays smooth and quiet. But it’s a bit more expensive than the smaller engines. 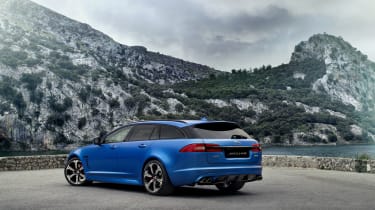 The only petrol engine on offer is the hugely powerful 5.0-litre V8 in the XFR-S Sportbrake. With 548bhp available, it delivers surge of power at almost any speed and 0-62mph is over with in just 4.8 seconds. Just like the diesel engines, the V8 petrol is connected to an eight-speed automatic gearbox, but this version has been modified to handle the extra horsepower and ensure lightning-fast changes.