“The Jaguar XF Sportbrake is as elegant and enjoyable to drive as the saloon, but with the added practicality of an estate”

While saloon cars have fallen in popularity as people flock to SUVs, the practical estate has enjoyed a loyal following in the UK. Given this, it’s perhaps surprising the Jaguar XF Sportbrake estate didn’t arrive until 2012, a full four years after the four-door. So was it worth the wait?

We’d say so, because the Sportbrake certainly adds practicality to the XF, and it does so without detracting from its other qualities. The Sportbrake is just as fun to drive, and while beauty is subjective, the Sportbrake may well look even better than the handsome saloon to fans of the breed.

Jaguar has been careful not to repeat the same delay twice, launching the second generation of Jaguar XF Sportbrake in 2017 just over a year after the saloon launched. 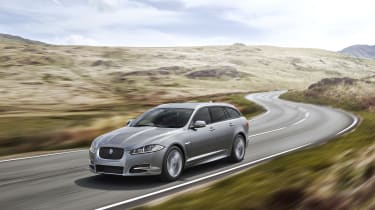 Fold the rear seats down and maximum luggage space shoots up to 1,675 litres, dwarfing the 963 litres available in the saloon. There are other benefits, too, because the longer roofline affords back-seat passengers some extra headroom and the tailgate has a far larger opening than the saloon’s somewhat restrictive bootlid.

While not class-leading for space, the XF Sportbrake was competitive with the BMW 5 Series Touring, Audi A6 Avant and Mercedes E-Class Estate when it launched, while boasting more character.

Two diesel engines are available, with the four-cylinder 2.2-litre aimed squarely at company-car drivers and private customers after lower running costs. Available with either 161 or 197bhp, it returns fuel economy ranging from 55.4 to 57.7mpg and respectable CO2 emissions, from 129 to 139g/km. Performance will be brisk enough for many, with the 197bhp model a better all-rounder thanks to its 0-62mph acceleration in 8.2 seconds.

On the downside, the smaller engine can be somewhat gruff when starting and under acceleration. The larger 3.0-litre V6 is far smoother and faster, which undoubtedly makes it feel well suited to the Jaguar, but also adds to its costs. Like the smaller engine, the 3.0-litre is also offered with two power levels; the regular 237bhp version and the 271bhp 3.0-litre S with added performance hardware, cutting the 0-62mph time from 6.7 to 6.1 seconds. Both versions were fitted with an automatic gearbox as standard and return an identical 46mpg, so the S version is a good buy if it’s within budget.

If performance is your top priority, the XFR-S Sportbrake is about as close as an estate can get to being a supercar, with blistering acceleration and a thrilling soundtrack from its exhaust. Needless to say, you’ll also spend a lot of time at the local petrol station, with fuel economy realistically in the low 20s.

With rear-wheel drive and suspension honed specifically for UK roads (the XF was developed mainly around Jaguar’s Midlands headquarters), the Sportbrake feels beautifully balanced on the road. The steering is quite light, but accurate and slick, and the same can be said for the automatic gearbox.

Costing in excess of £30,000 and with top versions far in excess of £50,000, the XF Sportbrake isn’t a cheap car, and that’s reflected inside. Materials are mostly of a very high quality and plenty of leather and wood trim adds to the feeling of luxury.

Safety could be a concern, however, with the XF only receiving a four-star score after Euro NCAP crash tests, when most large executive models manage the full five stars. A full roster of safety kit is fitted, including multiple airbags, electronic stability control and even a pop-up bonnet designed to protect pedestrians in an accident.