Thanks to thrifty diesel engines, most of the XF Sportbrake range is reasonably efficient. It’s nearly as good as the likes of the BMW 5 Series Touring or Mercedes E-Class Estate in this respect, but doesn’t quite beat them. The XFR-S Sportbrake’s astronomical running costs are in a different league, however – but that’s the price you pay for a high-performance car.

Used values are good – the Jaguar brand still has a lot of appeal – but you won't do quite as well in this area as you would with one of the XF's German rivals from Mercedes, BMW or Audi.

Every model other than the hot XFR-S Sportbrake is equipped with a diesel engine, which keeps running costs low across most of the range.

The 161bhp 2.2-litre diesel engine is naturally the most efficient choice. An average fuel economy figure of 57.7mpg and CO2 emissions of 129 grams per kilometre make for reasonable fuel costs and road tax of £110 per year. However, even though this is the most economical engine in the XF range, the BMW 520d Touring is capable of around four miles per gallon more and the Mercedes E-Class Estate offers a hybrid model that performs even better. 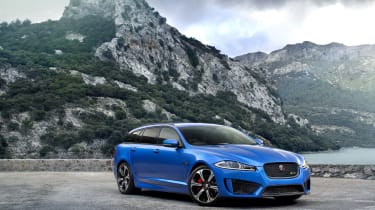 The 5.0-litre V8 petrol used in the XFR-S Sportbrake isn’t for the faint-hearted; it’s by no means cheap to run. With fuel economy reaching a maximum of just 31mpg (but more likely falling into the high teens) expect to be visiting your local fuel station very frequently.

The Sportbrake’s insurance groupings start from 33 for the 2.0-litre diesel Luxury model. The XFR-S Sportbrake hits the maximum group 50 due to its enormous power.

All Jaguar models have a three-year/unlimited-mileage warranty, which is pretty standard for a car in this class.

A service is recommended every year, and Jaguar will perform an interim service on your XF Sportbrake from £199.