The Mercedes C-Class Coupe is great to drive, although not quite a match for the BMW 4 Series

The Mercedes C-Class Coupe is a great car to drive, although it's not quite a match for the current BMW 4 Series when it comes to handling and agility. However, that could change when the updated version of the C-Class Coupe arrives in 2015.

That isn't to say the C-Class Coupe isn't a very capable car on the road – it is. There's plenty of grip and decent handling thanks to its traditional rear-wheel-drive chassis – it's just not an out-and-out sports car like some of its rivals. The steering doesn't offer as much feedback as the BMW 4 Series', but it's still a lot of fun on the road in most circumstances. 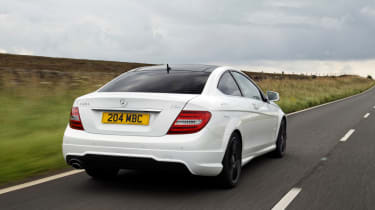 And whatever the surface, adaptive dampers (fitted as standard) constantly adjust to iron out the lumps and bumps that are all-too-common features of UK roads these days. However, the coupe's fat, low-profile tyres do make rather a lot of noise, which transfers into the cabin more than we'd like. This problem is probably not helped by the fact that the coupe's suspension is 15mm lower than the saloon's.

The petrol engines in the Mercedes C-Class Coupe represent two extremes. The C180 has a 1.6-litre engine that provides reasonable performance given its small size. It'll cover 0-62mph in 8.5 seconds and reach a top speed of 140mph, making it the slowest model in the range. In the real world, those figures are more than adequate, but it can feel a little underpowered at speed – something that's most noticeable when trying to overtake with passengers on board.

At the other end of the spectrum is the Mercedes C63 AMG, which packs a 6.2-litre V8 engine under the bonnet. It's loud and extremely fast, with more than 500bhp cutting the 0-62mph time to just 4.2 seconds. There are few more intoxicating sports cars out there, and this is one of Mercedes' last big V8 engines. The latest crop are smaller and more efficient, but lack that iconic muscle-car sound.

Both of the diesel models are powered by a 2.1-litre engine. It's a little noisy starting from cold and when you're accelerating, but at a cruise, it's pleasantly quiet. The C220 CDI is fast enough for most buyers, who tend to choose the C-Class Coupe more for its restrained style than outright performance. That model will cover 0-62mph in 8.4 seconds and reach a top speed of 144mph – impressive when you consider the 60mpg-plus potential. The C250 CDI feels very similar, but cuts the 0-62mph time to seven seconds.