The engine range is decent, but the Mercedes E-Class Cabriolet is a cruiser rather than a sports car

The Mercedes E-Class Cabriolet is intended more as a long distance cruiser than an on-the-limit sports car. Unlike the Mazda MX-5 or Audi TT Roadster, which are built to perform and entertain, the E-Class Cabriolet focuses more on luxury and wafting across the country. Those looking for a spot of driving thrills should look elsewhere.

The similar size BMW 4 Series convertible is much sharper to drive and is built to cater more to driving enthusiasts, but the Mercedes is much more refined on the road. The E-Class Cabriolet’s steering is very well weighted and accurate, while the ride is supple and comfortable. 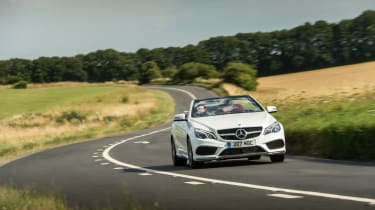 The relaxed seven-speed automatic gearbox also suits the character of the car. In automatic mode, changes are smooth and well timed, but in manual mode it never gives full control to the driver, changing up automatically at times. It can also get flustered if you demand very fast changes.

The E400 petrol model has a 3.0-litre twin-turbocharged V6 engine. It replaces the thirstier E500, which was fitted with a V8, but doesn’t sacrifice much performance, despite being smaller. The V6 has 333bhp available and is capable of launching the cabriolet from 0-62mph in just 5.3 seconds. Top speed for this model is electronically limited to 155mph.

The other petrol, found in the E200, is a 2.0-litre turbocharged petrol which takes a more leisurely 8.3 seconds. The added weight of the cabriolet over the coupe is the prime reason for the time difference between the two.

The same story applies to the diesel engines in terms of the Cabriolet’s weight. The 2.1-litre diesel in the E220 BlueTEC performs perfectly well, with a 0-62mph time of 8.2 seconds, but the E350 BlueTEC is the better all-rounder. Its blend of performance and decent economy means it’s the best of the bunch.

In general, the diesel engines suit the character of the E-Class Cabriolet better; there’s still a decent amount of performance as all of the diesels feel strong enough, but the power is lower down the rev range, which maintains the Cabriolet’s personality as a laid-back cruiser.