The E-Class Cabriolet isn't as practical as its rivals

Few people buy a four-seat convertible for its practicality, but even so, you expect a reasonable boot and enough room for two people in the rear. However, space may be good inside the E-Class but its main rivals, the Audi A5 Cabriolet and the BMW 4 Series, beat it for outright space.

Naturally, those sitting in the front will benefit most from the interior space. There’s plenty of adjustment in the driver’s seat to find the right driving position and the seats go far back enough. Front passengers should be careful not to push the seat right back, though, as they could squeak against the rear seats bases if you’ve specified the leather upholstery.

Storage is taken care of in a number of places, namely the large glovebox that can swallow up a big bottle, and a lidded bin on the centre console between the seats. Deep door pockets are also big enough for one-litre bottles of water. 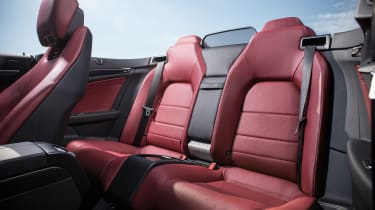 The rear seats are usable, which is rare for a four-seater convertible - as long as the driver and front passenger don’t like to sit too far back. Legroom isn’t great in the back at the best of times, but convertibles are never known for their acres of rear space.

The Mercedes E-Class Cabriolet has space for a few soft bags in the boot, but both the Audi A5 and BMW 4 Series offer more outright carrying capacity. However, the BMW's folding metal roof is bulky and compromises boot space more than the others when folded. 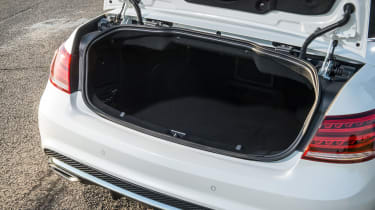 There's also a through-load hatch into the passenger compartment that allows you to carry longer items, and it's possible to seat four inside as long as the driver and front-seat passenger don't like to sit too far back.