The hatchback’s famed ‘go-kart-like’ handling remains intact in the MINI Convertible version, making it one of the most fun-to-drive drop-tops on sale in the UK right now. Unfortunately, that fun character comes at the expense of comfort, as the car’s firm suspension crashes and thumps over poorly surfaced roads – which can be as much of a problem in speed-bump-infested urban environments as it is on rough country back roads.

The basic One model feels a bit underpowered thanks to the convertible’s extra weight, but this isn’t as much of a problem in the more lively petrol Cooper and Cooper S models.

However, as open-top driving is arguably about the sense of occasion that comes from having the wind blowing through your hair, that power deficit may not bother many buyers – especially as the car’s list price naturally goes up the more performance you want. 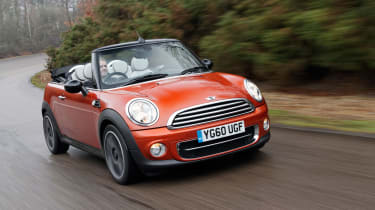 For those who are interested in having a quick car, the Cooper S is particularly impressive, thanks to a 182bhp 1.6-litre turbocharged petrol engine, which also sounds great. This engine complements the convertible's sporty nature, enabling it to get from 0-62mph in just 7.3 seconds. 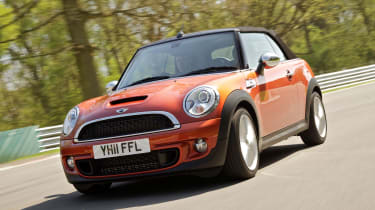 The performance-focused John Cooper Works model is easily the fastest version of the MINI Convertible on offer thanks the 1.6-litre four-cylinder turbocharged engine being boosted to deliver a total of 208bhp. This will take the car from 0-62mph in a truly hair-raising 6.9 seconds and on to a top speed of 148mph.

The Cooper D uses a BMW-developed 110bhp 1.6-litre diesel engine that’s very frugal, but the trade-off is that, like the entry-level petrol engine, it can occasionally feel a bit underpowered, particularly because the convertible version of the MINI is heavier than the hatchback. For this reason, we’d recommend the more muscular Cooper SD if you want diesel power.