Practicality is not the MINI Convertible's strong point. There's plenty of room for passengers up front, but what little rear room there is in the rear of the hatchback model has been squeezed further to make space for the folding roof. That means the rear seats are really only suitable for small children.

Being able to fold the roof back – either partially or all the way – at the touch of a button, naturally makes this MINI the most enjoyable version to own when the sun’s out (occasionally) in summer. The roof can be operated at speeds of up to 20mph, and takes nearly 20 seconds to fully open. That's slower than the Citroen DS3 convertible's roof, which can be operated at speeds of up to 75mph. At higher speeds, although the air can swirl about in the cabin a little, buffeting is kept to acceptable levels thanks to the upright front screen, while an optional wind deflector can be added across the top of the back seats. 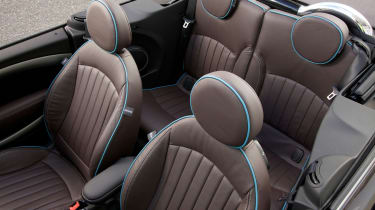 While space for the front two passengers is plentiful, the two seats in the back are so cramped that you may as well regard them as a large shelf on which to store bags, as they aren’t much use to children, let alone adults. A more pragmatic approach to the car’s layout is to regard the MINI Convertible as a two-seater – that way you won’t be disappointed by the amount of space in the rear of the car. Equally, if you need to regularly transport more than two people, then you may have to cross this car off your shortlist. 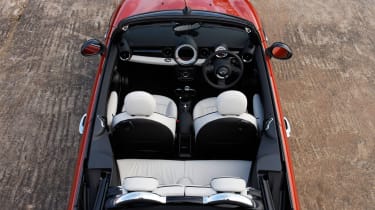 The MINI convertible’s boot is very small at 125 litres and will only accommodate a pair of small bags. As a result, the rear seats basically become an overflow area for luggage. The Smart ForTwo convertible, which is a smaller car, still has a comparatively large 220 litres of boot space.

None of the MINI convertible models are suitable to use for towing.