The Peugeot 208 diesel engine is very impressive, but the car isn’t as much fun to drive as a Fiesta

The Peugeot 208 has fast steering and decent grip, but the steering doesn't have the feel needed for confident fast cornering. The suspension ensures there isn't too much body lean in bends, but this car can’t match the finesse of the Ford Fiesta and doesn’t feel as comfortable cornering quickly.

The basic three-cylinder petrol engines have a distinctive noise that makes them feel quicker than they actually are. The 81bhp 1.2-litre version gets from 0-62mph in 13.5 seconds, with a maximum speed of 109mph. 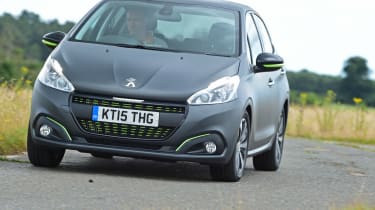 However, the lack of a six-speed gearbox makes it noisy on the motorway and the standard five-speed gearbox doesn't feel very tight or precise. Ford’s 1.0-litre EcoBoost engine has the beating of Peugeot’s entry-level 1.2-litre. Thanks to the addition of a turbocharger, it matches the Peugeot’s fuel economy, but is also much quicker. It’s offered with three different power outputs, but even the less powerful model can get from 0-62mph in 11 seconds. 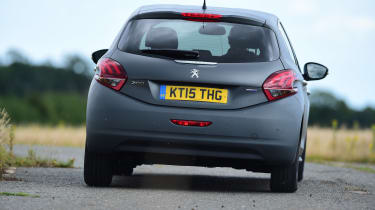 Choosing the 99bhp BlueHDi diesel means you get a six-speed gearbox, which makes the engine quieter at speed and also improves fuel economy. This is the engine to go for if you cover a lot of miles, and a 0-62mph time of 10.5 seconds makes it pretty nippy for overtaking.