Wide rear doors make it easier to get in and out of the back of the SEAT Leon than before, while head and legroom have both been improved, making this car a very comfortable way of transporting four adults for long distances. Five would be a bit of a squeeze, though. 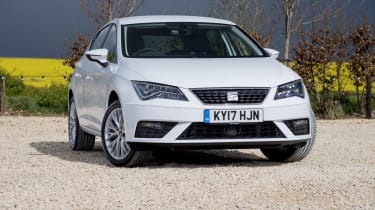 It really seems like SEAT considered criticism of the old model in designing the Leon. Its predecessor took flack for not being very practical, whereas the current car offers much more space. The driving position is great, too, and there’s no shortage of handy storage cubbies and cup-holders for holding your drinks, bits and pieces.

You now get 380 litres of space in the Leon's boot – which is more than in key rivals such as the Vauxhall Astra or Ford Focus. However, the SEAT Leon has a high boot lip, which makes loading difficult, especially when it comes to heavier or more awkwardly shaped objects. The rear seats split 60:40 to enhance usability, but it's a shame they don’t fold down fully flat. Instead, they leave an awkward step in the boot floor, which can compromise practicality. An adjustable boot floor isn't available to rectify this, either. Total boot space with the rear seats out of use is 1,210 litres. 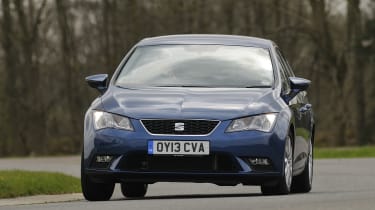 If you like the Leon but need more luggage space, the very practical SEAT Leon ST estate (which we’ve reviewed separately) is always an option.

You won't be using your SEAT Leon for serious caravanning holidays, because most of the petrols are limited to hauling a maximum of 1,500kg and the diesels to a maximum of 1,600kg. Nonetheless, the Leon is reasonably capable for towing, so large trailers and smaller caravans should be well within its ability.