The entire SEAT Leon engine range is frugal and smooth, although the 1.6-litre TDI diesel is the one to choose for the best fuel-economy figures

All engines across the SEAT Leon range come with fuel-saving technology as standard, which, combined with the car's low weight, make it the most efficient Leon yet. There are four petrols and two diesels to choose from. The 113bhp 1.0-litre TSI petrol provides smooth and eager performance, although the 1.5-litre petrol is even punchier and quick to rev.

There also used to be a 187bhp 2.0-litre turbocharged engine available in the sporty FR and luxurious Xcellence models. This made the Leon genuinely engaging to drive and turns it into a decent performance hatchback, if the very fast Cupra models are out of reach. 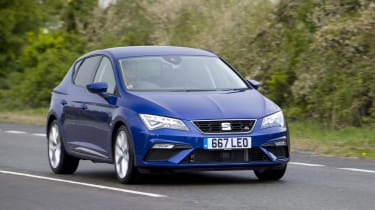 Lower-mileage private owners may prefer the 1.0 or 1.5-litre petrol versions of the SEAT Leon. The 1.5-litre comes with either 128 or 148bhp, and both provide a great balance of power and economy. For that reason, we'd recommend sticking with the 128bhp engine, as it's noticeably more affordable than the more powerful version.

A 1.0-litre turbocharged petrol engine was introduced during the Leon’s 2017 update, and officially returns up to 53.3mpg, though you'll struggle to achieve this figure with a fully loaded car - it occasionally feels slightly underpowered and may need to be worked hard. CO2 emissions of upto 107g/km are among the lowest of any engine, though, meaning this version will be attractive to company car drivers, thanks to its low BiK band.

During summer 2018, the 1.4-litre TSI petrol engine was replaced with a 1.5-litre TSI, with cylinder-on-demand technology to help save fuel. You can expect around 50mpg from both the 128bhp and the 148bhp versions, depending on wheel size and other factors, although the latter accelerates to 62mph over a second quicker so it feels that bit more responsive. The 128bhp engine emits between 110g/km of CO2 and the 148bhp engine, meanwhile, manages between 110-114 g/km, equating to a slightly higher BiK rating for almost all versions.

The cheapest versions in the SEAT Leon range to insure are the 1.0-litre petrol and 1.6-litre diesel, which sit in group 15.

The Leon's warranty is pretty standard fare – SEAT covers you for three years or 60,000 miles, whichever comes sooner. Paintwork is covered for three years and there's a 12-year guarantee against rust. However, SEAT differs from the norm in that it offers a full two years' breakdown cover as standard. You can pay to upgrade your cover to either four years/75,000 miles or five years/90,000 miles.

SEAT offers a number of fixed-price servicing plans that cover cars up to 15 years old. You can pay a fixed price of around £400 for your car's first two years/20,000 miles of servicing. To help spread the cost, customers can also pay around £20 a month (for 18 months) instead of upfront.