"Classy, well built and comfortable to drive, the Golf-based Octavia makes a smashing family car for drivers seeking space and quality on a budget."

Value for money is at the core of the Octavia’s appeal, but just because it’s comparatively cheap, that doesn’t mean it lacks desirability elsewhere. It’s also a very well built car with a spacious interior and boot. An update in 2009 resulted in a redesigned front, an improved interior and the addition of new engines. The diesels are the best sellers, with the Greenline version being the most economical of the lot. The sportier vRS version is available with a choice of powerful petrol or diesel engines.

The newer TSI petrol engines boast good economy figures given their performance, but the economy champions are the TDI diesels. Skoda’s GreenLine model offers 64.2mpg and emissions of 114g/km, and the regular 1.6 TDIs are almost as economical. The 1.9 and 2.0-litre TDI diesels use more fuel, as does the high-performance vRS with a petrol engine. Parts, servicing and insurance are quite affordable. The only potential downside is that resale values aren’t as strong as some rivals – although that’s improving for the Skoda brand in general now.

Good blend of performance and smoothness

Thanks to supple suspension and light, accurate steering, the Octavia is a fine long-distance cruiser. It soaks up bumps in the road well and there’s plenty of grip on offer. Stability is impressive – for example, the car is unaffected by motorway crosswinds. The cheapest 1.4-litre petrol engine is impressive for its size, but the other TSI turbocharged petrol engines all offer a better blend of performance and smoothness. TDI diesels are the most popular. The vRS versions feature sportier suspension settings, which makes them less comfortable, although buyers will like their hot-hatch-rivalling power and acceleration.

One of the most comfortable cars in its class

The Octavia is one of the most comfortable cars in its class. The supportive seats may feel a little firm at first, but they prove to be excellent on longer journeys. The driver has plenty of seat and steering wheel adjustment, so it’s easy to find the ideal driving position. The rear seats are spacious, and offer plenty of head and legroom for passengers. Wind and road noise are average rather than class-leading. Most of the Octavia’s engines are quiet, although the ageing 1.9 TDI diesel is noisy.

Very spacious, even for tall adults

There’s a lot of room on offer inside the Octavia. It’s more spacious than equally priced cars from other makers, and even six-foot tall adults should feel comfortable in the rear seats. Additionally, the Octavia’s boot holds 585 litres with the car full of people or up to 1,455 litres with the rear seats folded. A small step with the seats folded and a high load lip the width of the opening do make access a bit tricky, but the space on offer for luggage is vast.

Reliable, but only four stars for safety

All modern Skodas are built using parts that are shared throughout the Volkswagen Group – and that includes Volkswagens, Audis, SEATs and even Bentleys. The Octavia finished third place overall in the 2010 Driver Power Survey, rating particularly well for build quality, although it was 23rd overall for reliability. The car scored only four stars in the Euro NCAP crash test, but is still reasonably safe.

As the Octavia is larger and cheaper than its direct rivals, it’s considered very good value for money. However, the cheapest S models lack standard kit. Basics such as an alarm and electric rear windows are extra. Also, many models don’t have curtain airbags or electronic stability control as standard. Mid-level SE and Elegance-spec cars are best value. 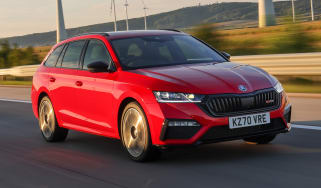 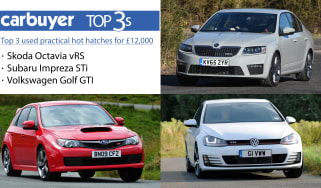 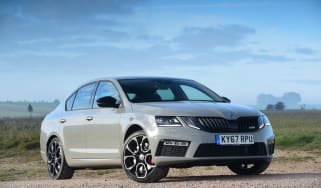