The Subaru XV handles well for an SUV, but the CVT automatic gearbox dulls its response

Subaru is renowned for building cars that handle well and the XV is no exception. While the steering is light, it feels sharp and body control is good for such a tall car. The CVT automatic gearbox maximises efficiency, but it’s also noisy and hampers throttle response. The manual shifts smoothly and is more satisfying to use, so it would be our recommendation.

The XV’s four-wheel-drive system is typically Subaru – incredibly tough and rugged. In fact, the XV is probably one of the few SUVs of this size that’s significantly capable both on and off-road, as opposed to only on tarmac. Rivals like the Nissan Qashqai and Mazda CX-5 don’t do that well off-road, despite having the option of four-wheel drive.

The suspension system and steering received an update in the summer of 2015 to further improve ride quality and handling. The suspension was tweaked to keep body roll to a minimum and Subaru claims to have made the steering sharper, so it requires fewer turns lock to lock. 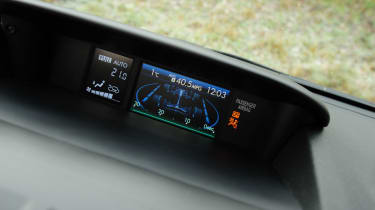 In fact, the XV is one of the few SUVs that only comes with four-wheel drive. The XV’s system intelligently diverts power between the front and rear wheels, so you should always have the most possible grip whatever the conditions.

There's only one petrol engine offered in the XV: a 2.0-litre that produces 148bhp and is capable of a 10.5-second 0-62mph time. The CVT Lineartronic automatic gearbox adds two tenths to that time. With this engine, the XV feels reasonably quick on the road, which goes well with its impressively accomplished handling. This engine is quite noisy, though – and gets even noisier with the CVT automatic fitted.

We think the 145bhp diesel engine is the one to go for, as it's strong, responsive and more economical than the petrol. Just bear in mind that the way this engine produces its power means you have to change gear quite often. Thankfully, the six-speed manual gearbox is very slick, so that isn’t much of a chore. Power is available low down in the rev range (just like most other diesels), so this engine works better with the four-wheel-drive system.