The Subaru XV is spacious and well equipped, but a firm ride can make it uncomfortable on bad roads

The XV’s impressive handling and controlled body lean is thanks to fairly firm suspension that soon makes its presence felt on poorly surfaced roads. Which is a shame, as that's where most XVs end up being used. We think Subaru would have been better off trading some of the XV’s dynamic ability for added comfort. The front seats don’t help either, as they’re not quite as supportive as they need to be.

Subaru claims the suspension upgrades implemented in the summer of 2015 will improve ride comfort and help to rid the XV of its firm feeling. 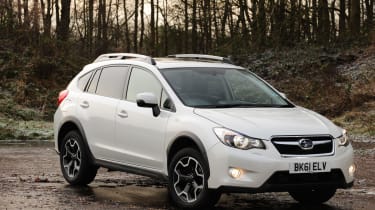 Most drivers will appreciate the XV’s minimalist dashboard, which does away with reams of confusing buttons in favour of a few controls that are immediately obvious at a quick glance. Most of the infotainment functions are controlled through a seven-inch touchscreen in the centre of the dashboard and there are a fair few buttons on the steering wheel, too. There’s also a clever little readout on top of the dashboard that displays things like your current average fuel economy and the status of the four-wheel-drive system.

Interior quality is a little under par, as scratchy plastics can be found in a lot of areas and the cheap looking and feeling silver inserts certainly don't help the cabin feel upmarket. Subaru improved quality with revisions in summer 2015, as well as adding extra soundproofing so that less wind and tyre noise makes it into the cabin.

The SE Premium adds sat nav and leather upholstery, but very little else. So much so that we’d recommend the cheaper SE version. Unless you really want built-in sat nav, the SE Premium isn’t really worth the extra £3,000 or so – especially considering the XV is pretty pricey in the first place.

Like many Japanese manufacturers, Subaru doesn’t offer that much in the way of an options list. Other than metallic paint finishes and the ability to add the sat nav and leather trim from the SE Premium to the entry-level SE, only dealer-fit accessories are available. These should help enhance the XV’s rugged appeal: roof racks, a dog guard and a detachable trailer hitch are all offered.