The Vauxhall Astra Sports Tourer has good safety credentials and overall reliability. Only one recall has been issued since the car went on sale in 2010, and the official crash-test ratings reveal the Astra Sports Tourer to offer excellent protection for its occupants in the event of a crash.

Overall fit and finish also seems to be pretty good on the Vauxhall Astra Sports Tourer, as expected from a car that’s aimed at more upmarket rivals like the Volkswagen Golf estate. In general, owners seem highly satisfied with the build quality of their Vauxhall Astra.

The big letdown with the Astra Sports Tourer appears to be the company that makes it – Vauxhall as a whole came a lowly 28th out of the 33 rated manufacturers in our Driver Power 2014 owner satisfaction survey.

As with most of other Vauxhall models featured in the Driver Power 2014 owner satisfaction survey, the Vauxhall Astra didn’t do particularly well, coming in 124th out of the 150 top rated cars. However, the satisfaction rating for the Vauxhall Astra range was 84%, which is actually quite impressive, if not quite up there with the 89% and higher ratings given to the Volkswagen Golf, Kia Cee’d and Peugeot 308.

Most of the technology featured in the Vauxhall Astra Sports Tourer has also been fitted to various other Vauxhall models, so all major reliability issues should have been ironed out long ago. The only major blemish to the current Astra’s record is a recall issued in 2010 for a faulty front passenger seat, which only affected cars built during August of that year. 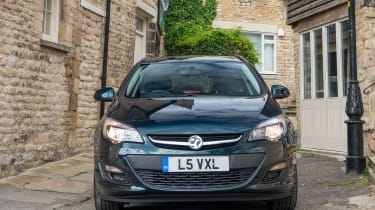 Currently, Euro NCAP has yet to crash-test the Vauxhall Astra Sports Tourer. However, it has awarded the standard Vauxhall Astra hatchback the full five-star rating, so it’s safe to say the Sports Tourer version will offer just as much occupant protection as the regular car in a crash.

Also, like the Astra hatchback range, all Sports Tourer models come with a decent amount of safety technology as standard, such as electronic stability control, six airbags, a tyre-pressure monitoring system and a feature that helps prevent the brakes from fading when under repeated heavy use. Buyers can also specify lane-departure warning, forward collision alert and cruise-control systems as options.