The Volkswagen Touran is good to drive, considering it is an MPV, with a range of modern engines and decent performance.

Based on the last generation Volkswagen Golf there’s not much body lean in corners, while the steering is accurate and nicely weighted. There’s plenty of grip making it feel very safe and secure, and while the suspension is quite firm, it’s not stiff enough to ruin comfort. All versions of the Touran come with strong brakes and electronic stability control as standard.

There are two diesel engines to choose from: a 1.6 and 2.0-litre TDI - the later with a choice of two power outputs.

However, if you are looking to keep running costs low, most people will find the performance offered by the 103bhp 1.6-litre diesel adequate. It gets from 0-62mph in 12.8 seconds, and has just enough power to make the VW feel quick enough even when it’s fully loaded. 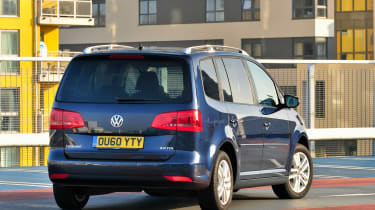 Performance is identical regardless of whether you go for the six-speed manual or seven-speed DSG automatic.If you want more power and a keener response when you press the throttle then the punchier 2.0-litre diesel is a good choice. The 138bhp version will accelerate to 62mph in 9.9 seconds, while the 175bhp model does it in 8.8 seconds. But the lower powered 2.0-litre never feels sluggish. In most circumstances, it’s more than sufficient.

With plenty of power from low revs, it responds well when you press the throttle. Both the SE and Sport model can be ordered with the 138bhp engine and there’s a choice of either a six-speed manual or DSG dual-clutch automatic gearbox - which with this engine is six-speed.

The more powerful 175bhp version comes exclusively in Sport trim with the automatic transmission. The manual has a precise shift action and the clutch pedal isn’t too heavy. But for ease of use, the DSG automatic takes some beating. Leave it in auto mode and it drives like any other automatic, or you can shift manually.

If you want the extra refinement of a petrol engine, then there’s a choice of 1.2 and 1.4-litre four-cylinder TSI petrol engines. The 1.2-litre is only offered on the basic S model, and it’s a little bit lacking in power when fully loaded, but it’s smooth, refined and economical.

If you don’t do lots of miles it’s price and economy make it a good choice. With a 0-62mph time of 11.9 seconds it’s quicker off the line than the 1.6-litre diesel, however it doesn’t have the low down power of the diesel and isn’t as responsive when you press the throttle.

The 1.4-litre TSI is more powerful but it isn’t as economical. It’s more responsive but still doesn’t have the instant response of the diesel versions. This is the only petrol engine you can have with an automatic DSG gearbox.