The Volkswagen Touran is a practical, family-friendly MPV with a solid, well equipped interior 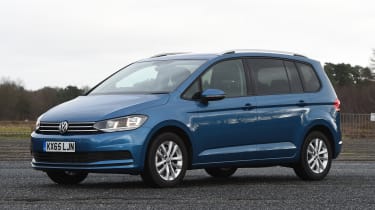 MPVs and people carriers have fallen from favour with many buyers, as large numbers of people switch to SUVs instead. No-one really buys a boxy MPV for its style but there’s no doubting that these vehicles are ideal for families, dog owners and people that need the flexibility to carry people or lots of cargo. The Volkswagen Touran may not be as popular as the Volkswagen Tiguan SUV, but it’s arguably one of the best used MPVs you can buy.

Rivals include the Citroen Grand C4 SpaceTourer, the Renault Scenic and the Ford C-MAX.

The Touran has been on sale since 2003, and the first-generation car enjoyed a 12-year production stint. Most cars are replaced after eight years or so, which shows how popular the Touran became. The Touran Mk2 was first available to order in September 2015 and, although MPV sales were starting to tail off, you’ll still be able to find plenty of used examples online. 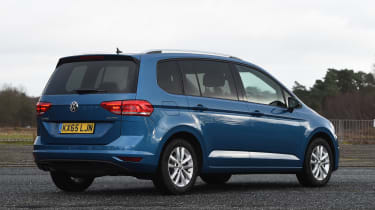 Since 2015, the Touran has changed little, and early models can be picked up for about half the price of a brand-new car. It may not be a particularly exciting vehicle but it’s easy to drive, and the interior is designed to make sure everything is exactly where you’d expect.

It might not look big enough from the outside but the Touran comes with seven seats, whereas many of its rivals make do with five. The third row of seats is quite small, however, and only suitable for young children or very short journeys. If you need to use the rearmost seats more regularly, you’ll be better off with a larger seven-seat MPV like the Volkswagen Sharan, SEAT Alhambra, Ford S-MAX or the Renault Grand Scenic.

A range of petrol and diesel engines are available, and most are powerful enough to deal with mixed driving. The 1.2-litre and 1.4-litre petrol engines are quieter and more suited to low-mileage drivers, while the 1.6-litre and 2.0-litre diesels are more economical and more readily available. Volkswagen gave the 1.6-litre diesel engine a small power boost in summer 2016 to 113bhp, but you’d struggle to notice the difference over the cars with 108bhp. Earlier in 2019, VW replaced the petrol engines with newer, similarly powered 1.0-litre and 1.5-litre turbocharged engines.

Which is the best Volkswagen Touran Mk2 to buy?

If you mainly do short journeys, the 1.4-litre petrol will be the engine to go for. We recommend avoiding the 1.2-litre, as it can feel underpowered when loaded up or on a motorway. Both diesel engines offer enough power for most situations but the 2.0-litre is our pick, as it’s nearly as economical as the 1.6-litre but slightly quicker and more comfortable on long journeys. The 2.0-litre is also the best option if you plan on towing a caravan or larger trailer.

Five trim levels are available and all offer enough equipment to keep everyone entertained and safe. The entry-level S trim is the only version not to come with alloy wheels but it does feature a large touchscreen with DAB radio and Bluetooth, all-round electric windows and heated door mirrors. SE adds 16-inch alloys, privacy glass, automatic lights and wipers, adaptive cruise control and extra storage, while SE Family offers remote-control child locks, a panoramic sunroof and better infotainment.

Unless you want larger wheels, three-zone climate control or subtle styling changes, the SEL and R-Line models are hard to recommend. For most, SE or SE Family are all the car you’ll ever need.

Like most Volkswagens, a Touran should be fundamentally reliable, but some owners have reported disappointing build quality issues. The VW Touran has been recalled a worrying four times in the past three years, for potential faults with the lighting, airbag, seatbelt pretensioners, head restraints and the panoramic sunroof. You should check to see if the car you’re looking at has had the work required by the recalls. 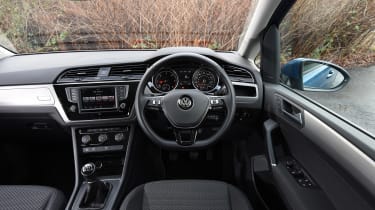 As long as the car is less than three years old and has fewer than 60,000 miles on the clock, you’ll still be covered by the original VW warranty.

The Touran is one of the safest MPVs you can buy, scoring a full five stars in its 2015 Euro NCAP crash test. Automatic emergency braking is available on all but the S model; another reason why we recommend upgrading to the SE spec if you can.

If you do plenty of motorway driving, the Touran’s service intervals can be as long as two years or 18,000 miles (whichever comes first). Lots of shorter journeys will reduce the service intervals to one year or 10,000 miles, but the car should tell you when a service is due if you can’t remember. Fixed-price servicing costs £179 for a minor service or £349 for a major service. 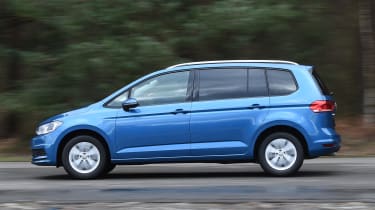 Diesel engines have a cambelt, which will need to be replaced every five years or 120,000 miles, costing around £500, while cars with the DSG automatic gearbox need the transmission oil changing every 40,000 miles. A VW garage will charge around £200 to do this.

You can expect around 50mpg from the diesels in real-world mixed driving, and about 40mpg for the petrols.

MPVs may be overlooked nowadays, but they can’t be beaten for usability and family friendliness. The Touran Mk2 is one of the best MPVs to buy thanks to its upmarket interior and efficient engines, while the sought-after VW badge means it should hold its value better than alternatives. Its small third row of seats adds extra practicality if you use them occasionally, and it has a large boot with five seats in place. 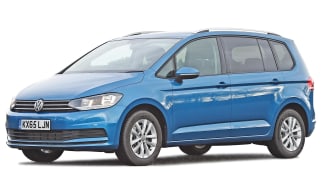