All MPVs are practical, but even in this class, the SEAT Alhambra stands out. It’s simply one of the most functional and spacious cars you can buy. The seating layout is very flexible and sliding side doors make it really easy to get in and out of, especially in car parks where the wide-opening doors of some rivals would restrict access.

In the second row there are three full-size individual seats. They slide back and forth independently and the seat backs can be reclined. There’s more than enough head and legroom for adults, plus the Alhambra is wide enough to allow sufficient shoulder room for three adults to sit comfortably side-by-side.

If you’re fitting child seats, all three second-row seats have ISOFIX mounting points, while the fact that you can offset the seats gives you extra flexibility if you’re fitting more than one child seat or booster. 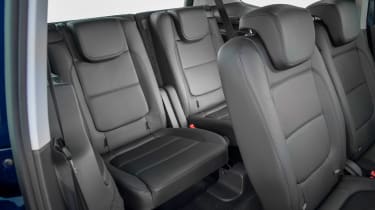 Access to the third row of seats is excellent. The sliding doors give a wide opening, while the outer second-row seats tilt and slide forward, freeing up space to climb into the back. The third-row seats fold out of the boot with ease, and at a pinch there’s enough legroom for adults to ride in the very back. For children, there’s plenty of space and the Alhambra’s big windows mean it isn’t claustrophobic in the back.

As you’d expect from a class-leading MPV, there’s also lots of storage. The front armrest has a cubby area underneath, while in SE trim and above, the Alhambra gets covered storage compartments in the second-row floor and a covered compartment on top of the dashboard. There are slide-out trays under both front seats, plus fold-down tray tables on the back of the front seats. You also get handy sun blinds in the rear doors, plus 12v and 230v power sockets in the cabin.

The more expensive SEL and Xcellence versions have power sliding side doors, plus a powered tailgate.

Thanks to its clever seating layout, the Alhambra is very flexible. Boot space is relatively small with the third-row seats in place, but the 267-litre boot provides enough room for a couple of small suitcases or a child’s buggy. This extra pair of seats folds flat into the boot easily, and in five-seat form the Alhambra has an 658-litre boot. With a wide opening, flat floor and low load lip, it’s a really useful space.

It gets even better when you fold the second-row seats flat, which gives you a vast, van-like load area of 2,297 litres and the ability to carry objects up to 2.95 metres long. There’s an optional roof storage box if you need even more space.

All of the seat movements are easy to operate, and unlike in some MPV rivals, you don’t have to lift out heavy seats to get a fully flat boot floor.

The SEAT Alhambra is a pretty capable tow car. When fitted with a petrol engine it can pull up to 1,800kg, while the diesel engines see this limit rise to 2,200kg.