The SEAT Alhambra’s safety rating is reasonable, and the brand's customers are generally happy

SEAT is part of the Volkswagen Group and the Alhambra is based on the Volkswagen Sharan, so it’s built from tried and tested parts and engines that have proven reliable. It also comes with lots of standard safety equipment and initially came with a five-star Euro NCAP rating. This was revised down to four stars in 2019, reflecting the fact that the crash test is now much more stringent than it was when the Alhambra was first tested in 2010.

SEAT put in a middling performance in our Driver Power 2019 customer satisfaction survey, coming 14th out of 30 manufacturers – a small improvement on the previous year.

The Alhambra itself is mechanically identical to the Volkswagen Sharan and is built in the same factory. So all the major components and engines are well proven, while production standards are very high. The Alhambra also comes with a three-year/60,000-mile warranty and you have the option to extend this for a fee. 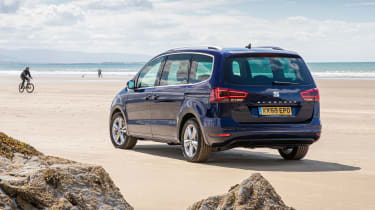 Safety is a big factor when you’re choosing a family car and the Alhambra originally scored the maximum five stars in Euro NCAP crash tests. However, this was back in 2010 and the tests have been made tougher several times since then; when the mechanically identical Sharan was retested in 2019, its score was revised to four stars, despite a rear door detaching in the side pole impact test. Overall, in 2019 the Sharan and Alhambra scored 89% for adult protection, 78% for child protection, 59% for pedestrian protection and 62% for on-board safety features, so they’re still safe cars.

All cars come with a full complement of airbags – including a driver’s knee airbag – as well as electronic stability control and ISOFIX mounting points for child seats. The front passenger airbag can also be disabled to allow the fitting of a rear-facing child seat in the front.

Even the most basic model gets front and rear parking sensors, which is handy for such a big car. All models feature a tiredness recognition system, which can work out if you've become fatigued and recommends that you take a break. it's disappointing, however, that autonomous emergency braking isn't available.