A good-to-drive large MPV with powerful diesel engines, the SEAT Alhambra handles and rides like a much smaller car

You don't expect large seven-seater MPVs to be particularly good to drive, but the SEAT Alhambra is actually a comfortable and entertaining car. Its steering is accurate and nicely weighted, while given the car's size, there's very little body lean in corners. It also has plenty of grip and feels very safe and secure on a twisty road.

The Ford S-MAX is more fun, but the Alhambra runs it close as one of the best-handling MPVs you can buy. The suspension is quite firm, but not so stiff that it ruins comfort for your passengers. It's worth noting the SE and SEL versions come with comfort suspension, while the Xcellence trim brings sport suspension, so while handling is slightly improved, the ride is also firmer.

With a relatively high seating position, you get a lofty view of the road, although the windscreen pillars cause a few blind spots. All versions of the Alhambra come with strong brakes and electronic stability control as standard.

There are two versions of the same 2.0-litre TDI diesel to choose from in the Alhambra: one with 148bhp and a more powerful one with 175bhp.

The former is slower but cheaper to buy and offers slightly better fuel economy, so which one you choose will largely depend on how important saving pennies at the pump is to you. Both provide decent performance and are powerful enough to cope with a fully loaded car. 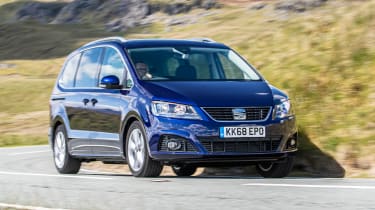 With plenty of power from low revs, both engines respond well when you press the throttle, even if you're towing a trailer or caravan. The less-powerful version is slightly less punchy, but it never feels sluggish. We think that in most circumstances, the 148bhp model will be more than sufficient.

If you want a petrol Alhambra, you won't be able to pick the Xcellence range-topper. The 1.4-litre TSI offered with lower trims is a great engine, returning pretty good fuel economy for a petrol and making enough power to haul the big SEAT along without fuss.

The smaller diesel engine is available with either a six-speed manual or DSG dual-clutch automatic gearbox. The manual has a precise shift action and the clutch pedal isn't too heavy. But for ease of use – especially around town – the DSG takes some beating. Leave it in auto mode and it drives like any other automatic, or you can shift manually using either the gearlever or paddles mounted on the steering wheel.