The SEAT Mii electric is cleverly designed, making it exceptionally spacious and versatile for a city car

The SEAT Mii electric is easy to get into, thanks to it's five-door layout, which also adds to its practicality. Unsurprisingly, there's no real difference between the Mii electric and the Volkswagen e-up! in the practicality stakes.

The SEAT Mii electric has a spacious cabin that’s easily accessed through all five doors. This makes the rear seats even easy to get into, while there are a number of other clever touches that boost the car’s practicality. 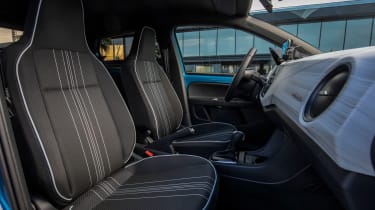 There’s enough room for four adults to sit in relative comfort, but legroom in the back may be a bit tight for taller occupants, especially on longer journeys. It’s perfect for kids, though, making the Mii electric a great school-run car. Storage space inside is good, too, with a decent-sized glovebox and door bins giving you plenty of room to keep odds and ends like water bottles, sunglasses and small bags.

With a 251-litre boot, the Mii electric offers more luggage space than even some cars from the class above. Its main rival, the Hyundai i10, has a very slightly larger 252-litre boot, but the Mii easily sees off the 196 litres offered by the Toyota Aygo, Citroen C1 and Peugeot 108. With the rear seats lowered, the five-door Mii electric offers overall capacity of 959 litres. 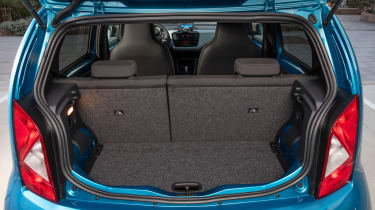 Both figures fall short of the Hyundai i10’s impressive 1,046-litre seats-down capacity, but are comfortably more than the Toyota, Citroen and Peugeot trio’s maximum of 780 litres.

We wouldn’t recommend you use the SEAT Mii electric to tow anything, as it doesn’t have an officially rated towing capacity. You’re probably better off adding an aftermarket roof rack and/or roof box if you want to temporarily boost the car’s luggage capacity.