Across the engine range, the Skoda Kamiq represents a decent blend of performance and economy

Few small SUVs are designed to be really good to drive, as most customers aren’t enthusiasts. But while the Mazda CX-30 and SEAT Arona are top of the class in this respect, the Skoda Kamiq doesn’t fall too far behind. It treads the line between sportiness and comfort really well - perhaps better than any of its rivals.

The gearbox, pedals and steering all feel light but without sacrificing accuracy. This means it’s an easy car to drive around town but one that isn’t out of its depth if you fancy driving briskly down a twisty back road. The Kamiq very quickly gives you the confidence that it’s a well-built, secure car that won’t do anything unexpected.

While it’s not the last word in driver involvement, it’s perfectly set up for the majority of buyers. The six-speed manual gearbox is very good, but when paired with the 1.0-litre, you have to work harder to overtake or drive up steep inclines, where the DSG automatic is quick to kick down into a lower gear. The Kamiq won’t be available with four-wheel-drive. 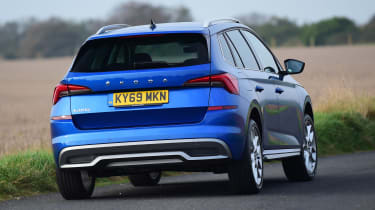 The engine range starts with a 1.0-litre three-cylinder petrol engine in two different power outputs. They produce 94 and 113bhp, and are mated to a five-speed and six-speed manual gearbox respectively. Acceleration from 0-62mph takes 9.9 seconds for the 113bhp engine and 11.1 seconds for the 94bhp model.

We found this engine a good fit for most drivers, with enough acceleration for overtaking when needed. Refined and smooth, it's ideal for driving in town but is competent on longer journeys too .

Skoda also offers a 1.5-litre, four-cylinder petrol engine and with 148bhp, it’s the range-topper, and will manage the 0-62mph sprint in 8.3 seconds. It has cylinder-deactivation technology, which shuts half the engine down when full power isn’t required. It's also very linear in its response, with enough pulling power to get the Kamiq up to speed without needing to rev it too hard. The weak point of this package is the DSG automatic gearbox, which doesn't feel particularly smooth when driving slowly, especially while manoeuvring.

Both 113bhp and 148bhp petrol engines, and the diesel engine, can be ordered with the DSG automatic gearbox.

The majority of Kamiq sales are likely to be petrol, so only one diesel engine is offered. Skoda’s 1.6-litre engine produces 113bhp and will get from 0-62mph in just over 10 seconds. Its economy means it’s the best choice for buyers doing more than 12,000 miles a year but it’s noisier than the petrols when you’re on the move. Unlike Skoda’s larger SUVs, a 2.0-litre 148bhp diesel engine isn’t available.