The Skoda Kamiq is more practical than many family hatchbacks

Skodas tend to be among the most practical cars in their respective classes and the Kamiq offers a huge amount of boot and passenger space. Some cars offer a big boot at the expense of rear space, but in the Kamiq there’s plenty of space for passengers and all their stuff.

The Kamiq may be on the smallest version of VW’s MQB platform but there’s more boot space available than many family cars from the class above. Small SUVs like this tend to be bought by young families, so it’s good to see that Skoda has made the Kamiq as practical as possible. 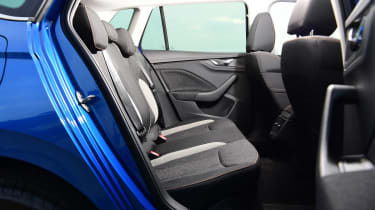 Skoda has applied its ‘Simply Clever’ touches to the Kamiq too, so it comes with a range of handy features that make life easier. The most famous one is the umbrella hidden in the driver’s door, but there’s also an ice-scraper in the fuel filler cap, a boot light that doubles as a removable torch, and an in-built funnel where you refill the screenwash.

If you regularly carry adult passengers, the Skoda Kamiq is the small SUV to buy, as rivals can’t match its rear-seat space. Having enough space for two six-footers to sit behind each other is very impressive in a car of this size, and the large windows help to make it feel airy and spacious. You’ll be able to spec a panoramic sunroof to flood the cabin with light, but this’ll cut into headroom slightly.

There are a few storage cubbies dotted around the cabin and each door pocket can hold a large water bottle. 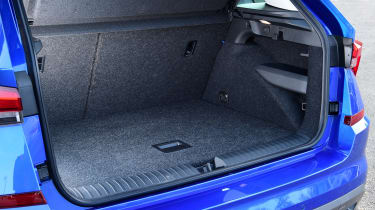 We’re used to Skodas having enormous boots but the Kamiq prioritises interior space over outright luggage space. At 400 litres, it may not have as much boot space as the Renault Captur, but it equals the SEAT Arona and is even bigger than many family hatchbacks including the Ford Focus, Volkswagen Golf, Mazda3 and Mercedes A-Class.

Lay the split-folding seats flat, and you’ll free up 1,395 litres. That’s only 15 litres shy of the Scala, and a sizeable 125 litres more than the Golf with its seats folded. A variable boot floor is available, meaning you can reduce the load lip and have a flat floor to carry bulky items.

Regardless of which engine you choose, the Skoda Kamiq can tow a braked trailer weighing just over a 1,000kg. The lowest powered petrol can manage 1,150kg, while the top petrol and diesel pushes this figure up to 1,250kg, which is enough to tow a small to medium-sized caravan.