The Rexton is an accomplished load-lugger, but interior space could be more generous

At a little less than five metres long, the SsangYong Rexton is a big car. However, its proportions are constrained by its separate chassis, so the bonnet is long and the boot is pretty enormous as well. The cabin, however, isn't quite as generous as you might expect. It matches similarly priced rivals on this front, but doesn't eclipse them.

Occupants may find the Rexton a little tricker to climb into than some SUVs because its floor is a little higher than most. The doors open wide, but the apertures are a little narrower than those of some rivals.

There's plenty of space behind the wheel for all but the very tallest drivers, although the footwell can be a little cramped if you have big feet. There's a wide range of adjustment available for the seat and steering wheel, the latter of which adjusts for angle and reach. The front seat passenger has plenty of space to stretch out, and there's ample headroom for all on board.

Those in the back are likely to find legroom sufficient rather than abundant. The seating position is fairly upright, though the seats are well cushioned and quite comfortable. A relatively flat floor means the centre occupant of the rear seat has somewhere to place their feet, but the interior isn't especially wide, so three adult passengers may feel a little cramped at the shoulders.

Although the seats in the third row are less generously padded, the fact that there's only two of them means that shoulder room is more generous. Legroom is a little restricted compared to the second seating row, and access requires that part of that row be folded out of the way. 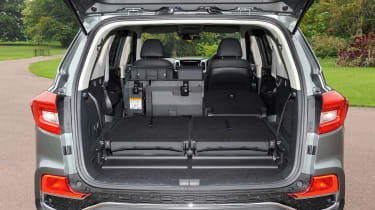 With a considerable overhang behind the rear wheel, the boot of the Rexton is unsurprisingly vast. The tailgate actually opens to below the level of a relatively high loading platform; on five seat models this is actually a false floor which can be lifted to unlock additional space beneath. The benefit of the false floor is that it allows an entirely flat load area when the second row of seats is folded down, unlocking a total of 1,977 litres in carrying capacity.

With the third row of seats in use, bootspace is a still impressive 820 litres, and it's a wide, deep space into which the wheel arches only intrude a little. While the boot floor is carpeted, the materials that line the sides of the boot can't match the quality of the interior fittings and betray the SsangYong's slightly budget roots.

The folding third row of seats occupies the space beneath that false floor when not in use, but the boot still offers 649 litres of volume when they're in place.

The Rexton's towing capability is one of its greatest virtues. Manual and automatic versions can both claim a 750kg unbraked trailer capacity, but it's the ability to tow a 3,500kg braked trailer that really impresses. This, four-wheel drive and a low-ratio transmission mode mean it should make short work of hauling a boat trailer up a greasy slipway, or pulling a large caravan from a muddy campsite.