Plenty of power, but driver appeal lags behind SUV rivals

Before directly comparing the SsangYong Rexton with rivals in terms of handling, we must first explain the ‘separate chassis’ setup used in the car’s construction. Often referred to as 'body-on-frame', this construction technique sees the Rexton's engine, gearbox, driveshafts, axles, wheels and suspension contained in one assembly, onto which the body is attached as a separate unit. The Land Rover Defender is built this way, as are many of today's popular pickups.

By contrast, the majority of other SUVs on the market, including the latest Land Rover Discovery, Kia Sorento and Hyundai Santa Fe all use 'unibody' construction, where the engine and running gear are directly attached to the bodywork – the same way that regular hatchbacks and saloons are constructed. Drive a unibody-constructed SUV on a country road, and it feels much like a taller, heavier version of a regular family car. The Rexton, though, feels a little different – and can take a little getting used to.

The 'multilink' suspension system the Rexton employs is fairly sophisticated for a body-on-frame car, and the ride is generally quite smooth, although the big 20-inch wheels of top models do negatively affect the car’s ride – the thinner tyre sidewalls are less able to absorb potholes and bumps than the tyres on smaller wheels.

The Rexton doesn't lean in corners as much as you might imagine, either. Thanks to its big tyres, there's quite a lot of grip available and the Rexton takes corners with little more fuss than a family hatchback. 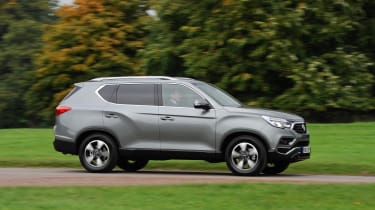 However, there's no getting away from the Rexton's poor low-speed ride quality, which sends jolts through the whole car when driving around town. Things do improve as the speed increases, but it still lags behind rivals like the Mitsubishi Outlander and Renault Koleos. At least the driving position is comfortable enough to improve things for the driver.

The steering is also vague and lacks much in the way of feedback, endowing you with less confidence when cornering at speed. That characteristic – or flaw, as it is on the road – is positive attributes when traversing rough terrain, where easy, slow steering is a boon for crawling around tight off-road tracks. With loads of vertical travel at each wheel, selectable four-wheel drive and a low ratio setting easily to hand, the Rexton follows the mud-plugging footsteps of its predecessors.

Only one engine is offered for the Rexton, a 2.2-litre, four-cylinder diesel. Unlike previous models with engines produced under license from Mercedes, this engine is all SsangYong's own work, and it's impressive.

Although it grows boomy when pushed really hard, it's impressively quiet when pootling around town or cruising at motorway speeds. It rarely feels underpowered, either – at over two tonnes this is a big, heavy car for a relatively small engine, but its 178bhp is effective.

A 0-62mph time of 11.9 seconds for the automatic version doesn't impress on paper, but there's an initial rush of power that means you can get away sharply when the traffic lights turn green. The seven-speed Mercedes-sourced gearbox helps significantly – the points at which it changes gear are well judged, and there's never a clunk or jerk between gears.

You can make manual gear changes with a rather frail-looking rocker switch in the gearknob, but this is far more suited to those times when you want to choose a specific gear for certain tasks – descending a sharp incline or towing on a slipway, for example – than for sporty driving, as the gearbox is relatively slow to reply to your demands.