"The Land Rover Defender is the ultimate off-roader. What it lacks in new-car comfort and convenience, it makes up for with excellent off-road ability and more character than any modern SUV." 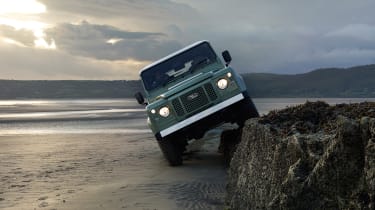 The Land Rover Defender is a true icon, with a production run that spanned nearly 70 years. The final model was built in 2016, when changes to legislation brought about it's demise. Since then, Land Rover has been busy creating the all-new 2020 Defender, which is expected to make its long-awaited debut later this year at the 2019 Frankfurt Motor Show.

For many though, icons never die and unlike some discontinued models, the Defender is in a deep sleep rather than being completely dead. Indeed, Land Rover's Classic division will sell you a substantially re-engineered version of one of the final examples built – as close as it's possible to get to a brand-new Defender until the new model arrives.

The Defender remains one of the most capable off-roaders ever designed. It was arguably a rival to the Mitsubishi Shogun and Toyota Land Cruiser, but this was one SUV that emphasised Utility rather than Sport. If you want to relax in luxury, this really isn't the car for you. 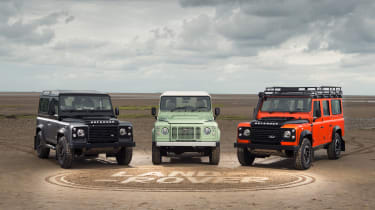 The Defender is full of charm and its 2.2-litre four-cylinder diesel has an authentically agricultural feel. With commercial origins, it’s loud and rattly when you start it and accelerate, yet for all its bluster, it only produces 118bhp. As a result of its meagre output and the Defender’s heft, 0-62mph takes 15.8 seconds, while fuel economy struggles to reach 30mpg.

The Defender has the perfect setup for off-road driving, but its rugged suspension and knobbly tyres mean its ride quality and handling are less suited to tarmac, where most drivers spend most of their time. The interior is spartan, with entry-level versions not even fitted with a radio. County models get modern features like a CD player and electric windows, while XS benefits from air-conditioning and Bluetooth.

Defenders are badged as 90, 110 and 130, which is the length (in inches) of the wheelbase – the distance between the front and rear wheels. There are a variety of bodystyles, too. The Station Wagon concentrates on carrying people, while there are also double and single-cab pickups, the van-like Utility Wagon and a bare chassis cab which can be fitted with a custom-made rear body. 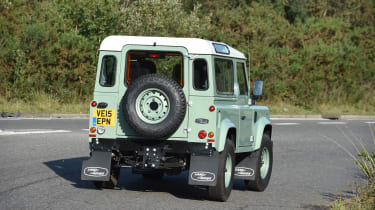 Land Rover finished production of the Defender with three limited edition last-of-the-line models. The off-road-focused Adventure Edition gets a sturdy roof rack with rear steps and a unique two-tone paint job, the Autobiography has a luxury interior with Range Rover-style leather seats and a premium stereo and the Heritage Edition, which features green paint, a cloth interior and styling details that hark back to the earliest Land Rovers. If you can get your hands on one of these, it’s likely to hold its value even better than a standard model and is surely destined to become a sought-after collector’s item.

As is the Defender Works V8. This brutal creation involves the careful disassembly of a late-build Defender diesel, before substantial changes are made to install a 5.0-litre V8 petrol engine. The work is performed at Jaguar Land Rover Classic's Ryton facility, near Coventry, alongside 'reborn' Jaguar E-Types and original two-door Range Rovers as they undergo restoration.

Originality isn't the objective, here, though – the resulting product is a money-no-object machine that counts the Mercedes-AMG G63 among its rivals. The dash from 0-62mph takes a fraction more than five seconds whether you choose the short-wheelbase 90 or five-door 110, and top speed is only limited to 108mph for fear of tyre damage. It has the looks to match the muscle, too.

Although it's an 'official' Land Rover model, purists might still question where the Works V8 fits into the Defender's long and distinguished history – is this a car for enthusiasts or show-offs? Still, whatever your opinion, it seems fitting that the Defender should go out shouting, rather than quietly fading away.