“The Mitsubishi Shogun isn’t as comfortable or modern as many SUVs, but if you need a capable 4x4 with excellent off-road credentials, it’s worth a look”

The Mitsubishi Shogun is a four-wheel-drive SUV that – while being quite old-fashioned – isn't without appeal, particularly if you need a capable off-roader or tow car. The Shogun is available in short-wheelbase (SWB) three-door and long-wheelbase (LWB) five-door forms.

The five-door model seats seven and is roughly the same size as a Volkswagen Touareg or Land Rover Discovery. Although it’s significantly cheaper than either of these cars, the Shogun has been on sale for over a decade now and it's really starting to show its age. Still, if you’re after a rugged SUV, it’s significantly cheaper than the similarly utilitarian Toyota Land Cruiser.

On a positive note, the Shogun is one of the most capable off-road cars on sale today. Its tough underbody, high ground clearance and clever four-wheel-drive system mean it can ford water up to a depth of 700mm, while mud, snow, rocks and gravel are all dealt with easily. Cementing these tough credentials is the Shogun’s towing capacity: the three-door model can pull 3,000kg, while the LWB five-door version can pull 3,500kg thanks to its rugged construction and powerful engine.

The Shogun comes with a 3.2-litre diesel engine, which produces 197bhp and has a far greater pulling power than that figure suggests. While it’s by no means a rapid car from a standstill, it never feels underpowered on the move. The three-door model takes 10.4 seconds to go from 0-62mph, while the five-door does the same in 11.1 seconds. Previously, it was possible to order a Shogun with a manual or automatic gearbox; as it nears the end of its time on sale, however, the Shogun is now automatic-only.

The downside to that capable diesel engine (the only one available) is that just like the Shogun, it’s far from modern. Fuel economy is unimpressive, with the five-door version returning just 30.4mpg and the three-door only bettering this figure by 1mpg; high CO2 emissions mean both cost a whopping £500 in annual road tax, too. Compare this to the Volkswagen Touareg (itself a relatively expensive car to run), which returns 42.8mpg and costs £210 a year to tax, and it’s clear that Mitsubishi is some way off the pace with the Shogun’s running costs.

While the Shogun is almost unbeatable off-road, during normal driving it’s pretty uncomfortable and feels somewhat agricultural when compared to the Touareg and Discovery. On winding B-roads, the Mitsubishi develops noticeable body lean, while bumps in the road cause it to jiggle about unpleasantly. In fairness, many SUVs are underwhelming on winding backroads, but the Shogun isn’t much better on the motorway, where its loud engine, uncomfortable seats and noticeable wind noise make it a far from relaxing car to drive. Still, the Shogun has plenty of loyal fans, partly thanks to its honest nature and go-anywhere ability.

Inside, this capable but unrefined theme continues. The Shogun’s dashboard feels well put-together and is logically laid out, but the plastics used are a little low-rent and the overall design is uninspiring. It’s roughly on par with the Toyota Land Cruiser for overall fit and finish, but Land Rover Discovery drivers may feel like they’ve taken a step back in time when climbing into a Shogun. Interior space is generous (although adults will find the two third-row seats of the five-door model tight) and the high ride height means the driver and passengers get a great view out.

The three-door Shogun has a relatively small 290-litre boot, while the five-door model has a more impressive 663 litres of storage space – although with all seven seats up, this shrinks to 221 litres. Do note that the boot door opens sideways, which can be a pain in tight parking spaces and garages.

The Shogun is available in different trim levels depending on whether you choose the three or five-door model. The three-door starts off with entry-level SG2 trim, with higher trim levels known as Warrior and Barbarian. The five-door model also starts with SG2, but then moves up through SG3 and SG4 trims on to the top-spec SG5 model. All cars come with alloy wheels, air-conditioning, cruise control, LED running lights, bright xenon headlights, automatic wipers, Bluetooth phone connectivity and remote central locking, with leather trim standard on all but the entry-level SG2.

In terms of reliability, while the Shogun didn’t feature in our 2016 Driver Power customer satisfaction survey, it uses tried-and-tested mechanical parts and should live up to its robust nature. Safety is more of a grey area: while all Shoguns come with mandatory equipment like electronic stability control, anti-lock brakes and ISOFIX child-seat mounts, more advanced systems like autonomous emergency braking aren’t available. The Shogun also wasn’t put through Euro NCAP’s crash-testing programme, so no official safety ratings are available. 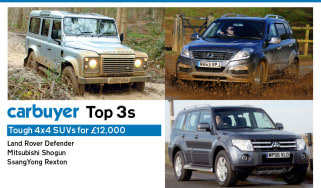 "Dear Carbuyer, I need a simple four-wheel-drive diesel for the farm, where off-road ability is essential. What can I get for £12,000?"
2018 Mitsubishi Shogun Sport prices, engines and on-sale date 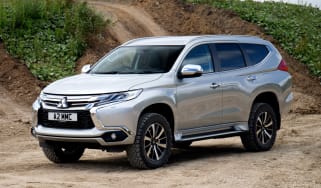 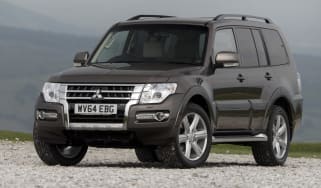 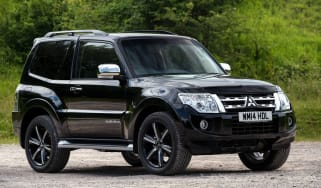 The Mitsubishi Shogun SUV is now available from just £26,199
Skip to ContentSkip to Footer