The Suzuki Vitara engine range is small, but its engines feel quite sporty

Although the Vitara is one of the least bulky compact SUVs, it's no longer in a field of its own. It leans markedly in corners and rivals such as the Dacia Duster are comfortably a match for the Suzuki when it comes to driving fun. The Peugeot 2008 and SEAT Arona – though SUV-like in appearance – are more removed from the traditional off-roaders of old, offering a more car-like feel.

Driving the Vitara around town doesn't feel like hard work, because the steering is light (if a little artificial-feeling). But as the Vitara is heavier than a city car, it's slower to change direction and leans more in corners than, say, a Suzuki Swift. It holds the road well enough at speed, though.

The four-wheel-drive Vitara offers various transmission settings so you can tweak the car to suit your driving style and the type of road – Auto, Sport, Snow and Lock. Choosing Auto when you're cruising on the motorway puts the car into a fuel-saving permanent two-wheel-drive mode. Other modes help you to get the most out of the four-wheel-drive system. 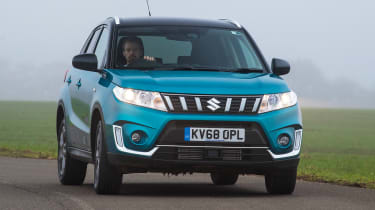 The 1.4-litre BoosterJet engine develops 127bhp, which is about 20bhp more than the old 1.0-litre engine. It might not sound like much, but it drops the 0-62mph time by two seconds to 9.5 seconds, which is easily competitive with (or better than) many of its rivals. All models get this engine, so there’s no sluggish entry-level version.

Its flexible nature means you're not forever having to change gear, which is good news because the Vitara doesn't have the slickest manual gearbox you can buy.

The four-wheel-drive version is a little slower, taking 10.2 seconds to hit 0-62mph. Both front- and four-wheel-drive Vitaras can manage a top speed of 118mph, so cruising at motorway speeds isn’t a problem.