Fuel economy and other running costs are reasonable

The entry-level SZ4 model has a reasonably competitive starting price but the mild-hybrid technology has pushed prices up by about £1,500 over equivalent non-hybrid versions. Forecasts suggest the Vitara won’t keep its value particularly well, which may push up your monthly payments on PCP finance deals.

The Vitara's fuel consumption figures, though, are much better since the electrical assistance was added. It’s now on a par with rivals, so shouldn’t be too expensive to run.

All Vitaras are now powered by a 1.4-litre turbocharged petrol engine, which is said to return 49.7mpg in two-wheel drive models. With the new mild-hybrid tech, it returns about 6mpg more than the non-hybrid 1.4-litre engine that was previously offered. CO2 emissions of 128g/km give it a middling Benefit-in-Kind (BiK) rate for company-car drivers. 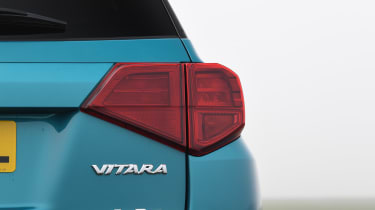 We wouldn’t recommend going for the four-wheel ALLGRIP drive model unless you really need it because it makes the car more expensive to buy and run. You can expect around 45mpg, while its 140g/km CO2 output pushes the BiK rate up by 3%.

All Vitara models cost £150 a year to tax, after a CO2-weighted year-one payment that’s included in the on-the-road price.

Insurance groups haven’t been revealed for the mild-hybrid models yet, but judging by the relatively high insurance group of the non-hybrid 1.4-litre petrol, the Vitara may be more expensive to insure than some other small SUVs. Entry-level versions of the Vitara's Nissan Juke rival start in a lower group 11, while the least powerful Renault Captur starts in group 8.

As with the rest of its range, Suzuki offers a three-year/60,000-mile warranty on the Vitara. This was once considered the industry standard, but rivals like the Kia Stonic come with a longer cover period as standard.

Suzuki says its cars should be serviced once a year or every 9,000 miles – whichever comes first. If you don’t drive many miles, this should mean the same annual trip to the dealership as most rivals, but if you drive a lot, the Vitara could prove more expensive than models with more miles between services. Suzuki offers a range of fixed-cost servicing packages across its cars, so the Vitara should also benefit from this.