No evidence of reliability yet, but Tesla’s reputation is encouraging

The Tesla Model X was crash-tested by Euro NCAP in late 2019, earning a five-star safety rating. In 2016, Tesla was the runaway winner of our Driver Power manufacturer survey but since then it hasn’t made an appearance due to too few responses from owners. However, we’ve heard little in the way of complaints from Model X owners, even with the vast array of technology hidden under the car’s bodywork.

We can’t compare Tesla’s 2016 Driver Power survey results with those of brands that feature in newer surveys. However, it is fair to say that owners then had mainly positive words for their cars, and we’ve heard little to suggest that things have changed. Owners rated the Model X very highly for reliability, although build quality came in for a little less praise. The Model X is closely related to the Model S under the surface and that car is now well proven. However, some owners in America have reported faults with the ‘falcon wing’ doors. 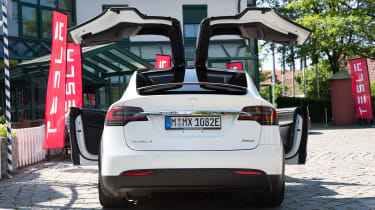 Thanks to its advanced suite of standard safety kit that includes autonomous emergency braking and the ‘Autopilot’ driving assistance system, the Model X scored a highly impressive 94% for safety assistance - a rating only matched in 2019 by the Model 3.