It’s very light, airy and comfortable, but the build quality of the Tesla Model X is a concern

As you might expect, the Model X is also a terrifically serene car to travel in, with barely a whirl from the motor as you pull away and only the faintest hint of wind noise rustling around the front of the car when you’re up to speed. Needless to say, with so little background noise to overcome, the stereo sounds fantastic.

Beyond its hi-tech touches, though, the Tesla’s interior isn’t actually the most imaginatively designed, nor are all the materials from the top drawer. All the switches that control things not directed from the huge central screen come from Mercedes of old, and some of the plastics on show can’t rival Audi or BMW for quality. 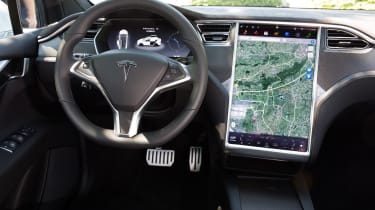 Hop into the Tesla Model X and you’d be forgiven for being temporarily stunned by the sheer size of the vast central touchscreen from which just about all of the car’s functions are controlled. While it looks impressive and seems like a fantastic idea, it might take you longer to completely get the hang of compared to other systems, especially if you’re used to a more conventional layout.

The old touchscreen weakness still applies, too – you may find yourself stabbing inaccurately at the screen on bumpy roads. We’d prefer a few more tactile physical buttons that you can use on the move without taking your eyes off the road.

There’s another screen that dominates the experience too, and that’s the one behind the steering wheel, which shows all the information you’d expect to find in the instrument binnacle of a conventional car. Like Audi’s Virtual Cockpit system, it’s fully configurable by the driver and can show things like speed, battery charge, sat-nav directions, range and what you’re listening to on the car’s stereo.

Connectivity in the Model X is a strong point; install the Tesla app on your smartphone and you can control a range of functions, including the remote-opening doors, climate control and even the headlights and horn. The app also shows how much range your car has left.

The Tesla Model X is a lavishly equipped car, whether you choose the Long Range or Performance. All have an air-suspension system with a GPS link that remembers where a higher ride height is required, those eye-catching ‘falcon wing’ rear doors and a huge panoramic windscreen and sunroof. More prosaic are the standard heated seats, keyless go, sat nav with real-time traffic information and up to four ISOFIX child-seat points, depending on the number of seats you choose.

The Model X can be chosen with five, six or seven seats, the first coming as standard. Choosing a three-row, six-seat layout costs an additional £6,300, while a seventh seat is an additional £3,400.

‘Enhanced Autopilot’ is another £5,900, but enables the car to autonomously change lanes to overtake slower traffic, and even to pull off onto slip roads according to the navigation route being followed. A full self-driving capability can be purchased post-delivery, and enables the car to begin its journey with a simple voice command of where you want to go – it can then theoretically do all the driving work itself. However, although the system is “ready to go”, it’s not yet approved for full use on public roads.