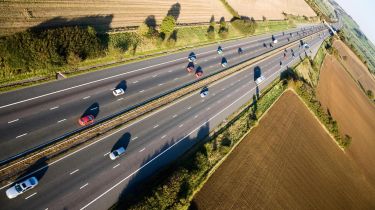 British drivers cover a staggering 64.3 billion vehicle miles each year on motorways, yet for some of us it may have been a while since we’ve driven on our 2,000 mile-long motorway network. With that in mind, we’ve put together a guide to motorway driving etiquette that should help make everyone’s journeys as smooth as possible.

You may have noticed the regularity with which lorry drivers flash each other. This practice has arisen out of both courtesy and safety: when one lorry overtakes another, the driver being passed flashes the faster truck to let them know there’s enough room for them to pull back into their original lane – something that’s hard to determine from the cab of an articulated truck. While it’s fair to say that if car drivers were to adopt this habit, the M25 would resemble a strobe-lit disco, showing other motorists a little extra consideration will only make your journey easier.

Letting other motorists know your intentions is vital, particularly given the speed differences you might encounter between the fastest and slowest vehicles on a motorway. If you don’t indicate far enough in advance – or not at all – other drivers will be unaware of your intentions. Don’t forget those immortal words: “mirror, signal, manoeuvre” to stay safe.

Use the correct lane

Although it may not always seem like it, the default lane to drive in on the motorway is the far inside lane. The rules of the road regard all other lanes as being for overtaking, so try not to hog the middle lane. Be aware of cars behind you that want to pass: even if you think their speed is likely to be excessive, always move out of the way for faster drivers when it’s safe to do so.

If you’re going to be leaving the motorway at the next junction or two, make sure you’re not in the outside lane, as negotiating your way from there to the exit ramp is not something to be done in a rush. Never try to cross more than one lane at a time.

Be patient with other drivers

If your want to go faster than the car in front and they’re not moving over, it’s easy to get frustrated. Even though learner drivers are now allowed on motorways to practise, it’s quite possible the driver of the car in front is inexperienced rather than thoughtless. If you’re tempted to tailgate or drive aggressively to make slower drivers move out of your way, try to imagine that your grandmother’s car is the one holding you up.

Similarly, be aware of people joining the motorway. If you’ve just passed an exit, a slip road for drivers joining the motorway will inevitably follow. Keep an eye out for merging vehicles, and be prepared to move into a different lane to let them onto the motorway. When traffic is particularly heavy, adopting what Americans refer to as ‘zipper merging’ is often a good idea: each car already on the road allows one (no more, no less) car to join in front of them.

Be extra-aware of your surroundings

Being aware of your surroundings is essential on any road, but on a motorway potential dangers can come from more directions and at greater speed. It can be helpful to think of a circle surrounding your car; regularly checking points around that circle is a must. Your primary area of focus should obviously be the road ahead, but be aware of what’s behind you and to your sides, too. Some more experienced motorway drivers cast an occasional (and peripheral) glance at traffic on the opposite carriageway, as – while it’s extremely rare – problems have been known to arise from traffic coming from the other way; this is generally something that only happens when there’s a contra-flow in operation.

On the subject of the opposite carriageway, don’t rubberneck if you witness a crash there. Human nature means we’re hard-wired to look at traffic collisions, but slowing down to see what’s happened has been known to cause further incidents – or serious delays, at least.

It’s easy to feel pestered by other motorists into driving faster than you’re comfortable with, but make sure you know what speed you’re comfortable doing and try to stick to it as closely as possible. Speeding up, but then slowing down because you’ve found yourself at a speed outside your comfort zone is frustrating for other motorway users.

The 70mph motorway speed limit has traditionally been viewed by many as something of a guide, rather than a steadfast law. However, the increase in speed-camera numbers, together with the growth of average-speed check zones, means 70mph is becoming more of an unbreakable limit. If this frustrates you, you may find consolation in the knowledge that a car travelling at 75mph is 15% less fuel-efficient than one doing 65mph.

While it’s tempting to relax as soon as you’ve entered a Roadchef, Moto or similar, motorway services can have unintuitive traffic layouts, with some areas intended for trucks or coaches only. Keep a close eye out for road markings and signs, drive with caution and trust your instincts if in doubt. Tired drivers, wayward children and baffling priority arrangements have the potential to make your break anything but welcome. Safe travels.

Read our guides to electric car charging stations or the most comfortable cars of 2019.