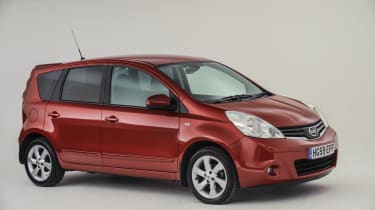 To call the first-generation Nissan Note an MPV might require a stretch of the imagination, but only a small one. With interior space that puts many larger cars to shame and lots of sensible, user-friendly touches, the Note is evidence that its engineers clearly thought hard about how people actually use their cars.

The Mk1 Note uses the same its mechanical underpinnings as the Renault Clio supermini, so it’s engaging enough to drive. The steering is light but precise, while the suspension resists body lean in corners without being too firm over ruts and potholes. 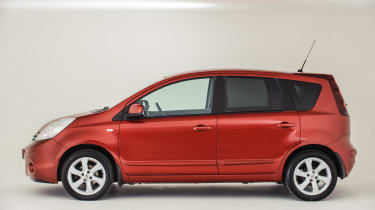 It’s the Note’s interior, however, that really impresses. The driving position offers plenty of adjustment so it’s easy to get comfortable, there are plenty of cup-holders and places to stow clutter, while rear seat passengers get a huge amount of head and legroom.

There are several clever features in the rear, too. Passengers in the back can slide their seats backwards or forwards to increase either legroom or boot space, while drop-down seatback trays are handy on longer journeys. The 280-litre boot is about only 10% down on the space offered in the larger and more expensive Ford Focus, and its floor mat is reversible, with carpet on one side and wipe-clean rubber on the other.

Three trim levels were offered, with Notes in S guise getting front electric windows, a stereo, remote central locking and ISOFIX child-seat mounts – bear in mind that these weren’t mandatory when the car first went on sale, though they are now. 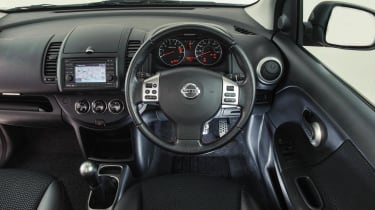 Notes in SE trim are very well equipped, with 15-inch alloy wheels, electrically-operated and heated wing mirrors, air-conditioning, rear electric windows, a cooled glovebox, curtain airbags for the front and rear windows, and extra speakers for the stereo. It’s this trim and the next up which get the seatback trays and the clever boot floor.

Half way through 2007 the Note’s trim levels changed to bring them in line with the rest of Nissan’s range. Visia, Acenta and Tekna replaced S, SE and SVE respectively, though the equipment lists were left largely unaltered.

That changed in March 2008, however, when Nissan made the reversible boot floor and seatback tables standard on all Notes. Rear electric windows, air-conditioning, Bluetooth connectivity and a 3.5mm auxiliary input for the stereo were also fitted to all cars. A 102bhp version of the diesel engine was added to the range in June of the same year, but Notes with this are very hard to find second-hand as most original buyers chose a petrol version.

More improvements came in January 2009, when the Note received a cosmetic facelift and the lower-powered diesel engine was made more economical, including lower emissions. At the same time, sat nav became standard on Tekna cars and was offered as an option with Acenta trim. Nissan also launched n-tec trim around this time. It adds a few extra features over Acenta, including 16-inch alloys and Nissan’s Connect touchscreen infotainment system, which was previously reserved for Tekna cars. 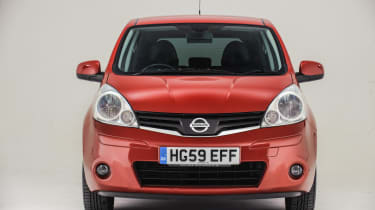 As if that weren’t enough tinkering, further improvements were brought out in August 2010 when electronic stability control became standard on all Notes. Keyless entry and keyless go also featured on n-tec models and above.

Which is the best Nissan Note Mk1 version?

With so many tweaks and changes throughout its life to date, you’re best off looking at individual cars to determine what equipment they have. We’d avoid early Notes in S trim, though, as these are pretty spartan inside and do without the handy features that make up much of other models’ appeal. Bear in mind that some owners report the 16-inch alloy wheels fitted to higher-spec Notes make the ride noticeably uncomfortable over rough roads. 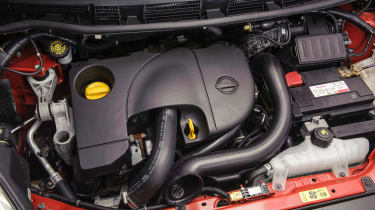 There’s not a bad engine in the Note range, but the diesel engine and the 1.4-litre petrol engine don’t have has much punch as the 1.6-litre petrol engine, so this is the one we recommend if you spend a fair amount of time driving outside town. The automatic gearbox was a pretty rare option and doesn’t really suit the Note’s character, but it’s pretty smooth; if you want it, go for it.

The original Note was launched back in 2006, so don’t expect it to be as economic or as cheap to tax as today’s superminis and MPVs. It’s by no means expensive to run, though, and servicing costs are minimal.

The 85bhp diesel engine manages up to 67mpg, depending on trim, and costs as little as £30 a year to tax, but check individual cars carefully as earlier diesels are up to 12mpg less efficient and cost as much as £130 to tax. The 1.4-litre petrol engine returns 42mpg and the 1.6-litre can do 47mpg, so they cost £130 and 185 a year in road tax respectively, but be aware that the automatic 1.6-litre can cost up to £210 – a big bill for a small car.

Nissan’s fixed-price service offers are reasonable, with a minor check-up costing £160 and a major one £250; add £20 to those figures for Notes with a diesel engine. 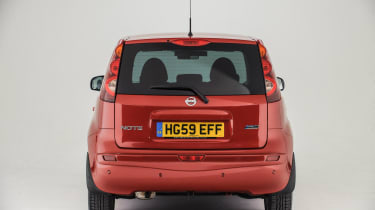 Fresh brake fluid is needed every two years, at about £30, while new coolant is £65 and needs to be added every 54,000 miles. A set of brake pads should set you back around £50, while discs are £65. The petrol engines are all chain-driven, but the diesels need a new cambelt every five years or 90,000 miles (whichever comes sooner); budget £400 or so for this job.

Nissan Note Mk1: what to watch out for

The Note has a generally solid reputation for reliability, though niggles aren’t unknown. Check the windscreen for any signs of damage, particularly in the lower edges – small cracks here can easily spread. 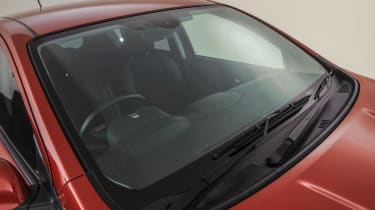 Feel for any resistance from the steering wheel, as some Notes have needed their steering rack replacing. Also, look in the footwells for any signs of damp – either current or from the past – as the air-conditioning has been known to leak. 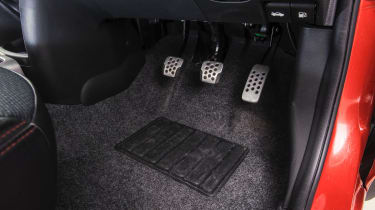 Open the bonnet and look at any drive belts you can see for signs of fraying or perishing; the auxiliary belt can suffer premature wear. On your test drive, listen out for squeaks coming from the front suspension as this often signals the anti-roll bar bushes need replacing. Check all the electrical systems work, too, particularly the windows and stereo – gremlins aren’t unknown. 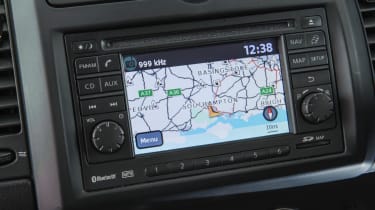 Nissan has recalled the Note four times. Faulty ISOFIX child-seat mounts on cars made from January and February 2006 prompted the first of these, while diesels built between January and October 2008 need a potential fuel leak looking at. The brakes on Notes assembled in November 2011 require attention, while cars made between June and September 2008 should have been checked for a steering fault. See the DVSA’s recall checker tool for more information.

The Note’s closest rival is the Honda Jazz, which is slightly duller to drive but at least as practical, and has an excellent reputation for being well built and reliable; see our guide to the Mk2 Jazz for more information. Have a look at the Renault Modus, too: this is mechanically related to the Note, but the longer wheelbase of its ‘Grand’ version makes it even more practical. The Vauxhall Meriva and the Citroen C3 Picasso should also be on your radar if you’re looking at this kind of car. 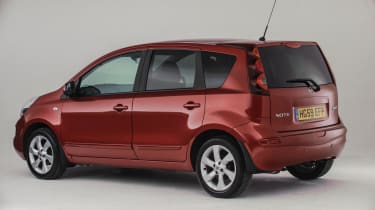 The Note makes a great family car, particularly if you have younger children: the standard ISOFIX child-seat mounts, wide-opening doors and generous legroom make it easy to fit child seats and fasten little ones into them. Older offspring will appreciate the drop-down tables, while dog owners and fans of outdoor activities should appreciate the reversible, wipe-clean boot mat. As well as being as practical as its dimensions allow, the Nissan Note is also quite enjoyable to drive – another string to its already impressive bow.