The Auris Hybrid is easy to drive and best suited for around town, but it’s certainly not for keen drivers 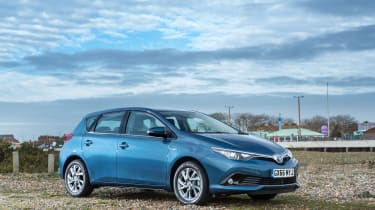 The Toyota Auris can’t compete with the Ford Focus or Vauxhall Astra when it comes to driver appeal and the extra weight of the hybrid’s battery pack and electric motor blunt its responses still further.

Body lean, while not excessive, is pronounced and gives the feeling of a lack of control, as if your steering efforts are only guiding the car rather than instructing it. Like other Auris models, there’s little feel through the steering, and while it’s possible to travel quickly on a challenging road, you’re not likely to derive a great deal of pleasure from doing so. The brakes are extremely sharp and suggest that the Auris is geared more towards safety and reassurance than driving involvement.

Ride comfort is good, although not featherbed-soft, and the Auris is a smooth, relaxing car to travel in. 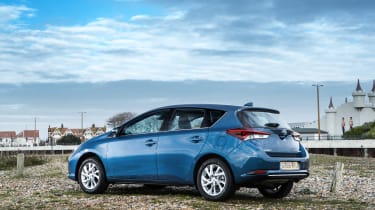 The Auris Hybrid’s powertrain is the same as that of the Prius, so there’s only one engine available: a 1.8-litre petrol with 98bhp. That’s aided by an 80bhp electric motor, with power fed through a constantly variable automatic transmission (CVT). Going from 0-60mph takes 10.9 seconds for the hatchback and 11.2 seconds for the Touring Sports. Top speed is 111mph, so the hybrid is slightly slower than the 1.2-litre turbo petrol or 1.6-litre diesel.

The CVT gearbox can be very frustrating. It tends to hold onto engine revs for longer than you’d want – which detrimental to fuel consumption and raises concerns as to how easily the Auris’ claimed fuel economy figures can be realised. Unfortunately, it’s the only gearbox Toyota offers with the hybrid.

When you start the car, it defaults to electric power and the petrol engine starts once the acceleration called for is more than the electric motor can handle alone. When the engine is running, it can sound rather overworked, with the engine speed often not matching the velocity you’re travelling at.