The Toyota Aygo is adequately spacious, but the Skoda Citigo is slightly easier to live with

The dimensions of the new Toyota Aygo are compact and perfect for city driving. At 3.4 metres long, it’s shorter than both the Hyundai i10 and Skoda Citigo. This small size, along with a high driving position and good visibility, makes the Aygo a doddle to park in town. Despite actually being lower than the older version, this Aygo has more headroom thanks to a 'double-bubble' roof and front seats that have been lowered by 10mm. 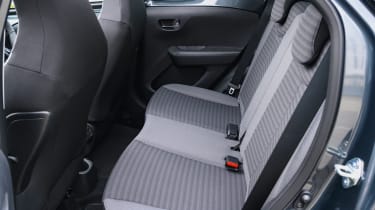 There’s plenty of space in the front of the Aygo, but the rear seats are short on legroom, even for smaller passengers. You’ll find more space in rivals such as the Hyundai i10. Additionally, people travelling in the rear may feel a little claustrophobic because of the small windows and tall front seats.

The Aygo has a decent-sized glovebox, as well as door bins big enough to swallow a 500ml bottle of water. There are also two cup-holders. Rear-seat access is obviously easier in the five-door model compared to the three-door, and Toyota discontinued the latter in July 2020. All Aygo models get ISOFIX child-seat mounts. The x-wave fabric roof option does little to affect headroom until it’s open, at which point it increases tremendously. 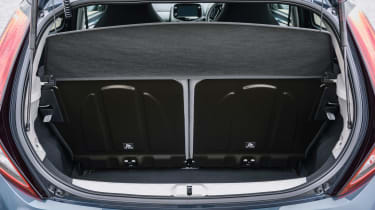 The Toyota Aygo can accommodate 168 litres of luggage with the rear seats up – enough to fit a pair of reasonably sized suitcases – but this is far from class-leading. It’s not a particularly accessible boot, either – it’s a bit of a reach from the boot opening to the floor. When folded down, the rear seats don’t create a flat boot floor, leaving a step that’s a bit of a nuisance. Rivals such as the Volkswagen Up! come with a variable boot floor as standard, which eradicates the step.

If you know that you’ll regularly need to carry bulkier loads, you should consider the Volkswagen up! or Hyundai i10. Both these cars offer a boot that exceeds 250 litres.