Fun and comfortable in town, the Toyota Aygo is capable of the odd motorway jaunt

As with most of its city car rivals, the Toyota Aygo is most at home in town. Here, its compact dimensions make it perfect for darting through congested streets and parking in tight spaces. The seating position is fairly high and all-round visibility is very good, which makes driving in traffic safer. All models now have a height-adjustable drivers’ seat.

Compared to the previous Aygo, the steering is more direct, but it could still be shaper and there is some tendency for the car to lean when you take a corner at speed. The ride quality also deteriorates on poorer road surfaces, but even tackling potholes never causes things to become too unpleasant. 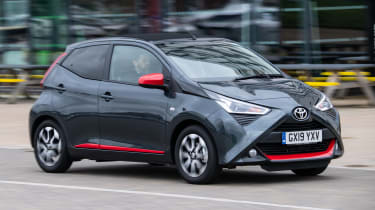 Two gearboxes are available – a five-speed manual and a five-speed automatic that Toyota calls x-shift. The automatic is convenient, but also has a negative effect on fuel economy and performance and we wouldn’t recommend it over the manual.

There's no choice of engine with the Aygo – every model has the same 1.0-litre petrol engine, shared with the mechanically similar Peugeot 108 and Citroen C1.

In the last couple of years, Toyota has made some small improvements, increasing power slightly to 71bhp and fitting a balancer shaft to the engine to make it feel smoother. When fitted with a manual gearbox, the Toyota can accelerate from 0-62mph in 13.8 seconds, which is on a par with versions of the Hyundai i10 and Volkswagen up! fitted with comparable 1.0-litre engines. The automatic x-shift gearbox increases this time to 15.2 seconds.

While it’s quite pleasant around town, this engine has become a bit of a weak link if you plan on driving on faster roads or the motorway, especially compared with models that are turbocharged. There isn’t a huge amount of power in reserve, but overtaking shouldn’t be too much hassle and the car’s interior is much quieter than those of previous Aygos – if not as refined as a Volkswagen up!.