The Toyota Aygo is safe and expected to be reassuringly reliable

The Toyota Aygo feels solidly built and the engine – which has been in production for over a decade – should continue to prove reliable. A five-year warranty will keep any repair costs to a minimum. The car also fared well in the Euro NCAP crash tests and comes with a decent range of safety kit as standard.

The Toyota Aygo was rated 43rd out of 75 models in our 2018 Driver Power owner satisfaction survey of cars currently on sale in the UK but failed to appear in 2020's results. Of the owners who responded, just 4.9% reported experiencing a problem with their car at least once.

Low running costs were by far its owner's favourite Aygo attribute, with the car's infotainment technology and bold looks earning praise, too. Interestingly, the mechanically similar Peugeot 108 and Citroen C1 did less well in the survey.

We didn't get enough responses from Aygo owners to include it in the 2020 survey, but Toyota did very well overall. A number of models scored well and the brand scored a top-10 finish out of 30 manufacturers. 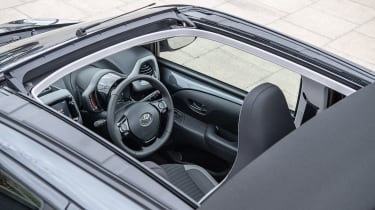 The Aygo was awarded four out of five stars for safety by crash-testing body Euro NCAP when tested in 2014, scoring 80% for both adult and child occupant protection. These crash tests have become more stringent in recent years, so missing out on the maximum five-star rating isn't hugely significant. Retested cars often score lower too, for example the rival Volkswagen Up! scored the maximum five-stars in 2011, but when it was retested in 2019 it achieved a three-star rating.

As standard, all Aygos have anti-lock brakes, four airbags, electronic stability control, ISOFIX child-seat mounts and a system that monitors tyre pressures. You also get a reversing camera on all models.

The Toyota Safety Sense pack only used to come as standard on the x-clusiv trim level, but it's now fitted to all. It features a suite of driver assistance tools, including automatic emergency braking (reduces the likelihood or severity of a low-speed shunt) and lane-departure warning (alerts you if you drift out of your lane).