As long as you’re not expecting too much of a car-like experience, the Toyota Hilux is easy and enjoyable to drive 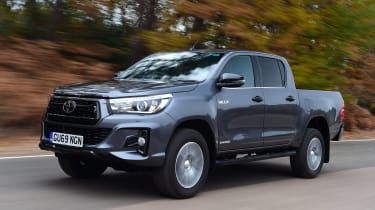 Pickup trucks have improved in leaps and bounds over the past decade or so, and the Toyota Hilux is no exception. You sit upright and high up, so the view out over most other traffic is good, while the accurate steering instils confidence – a welcome feature given the Hilux’s size. It’s also impressively comfortable over bumps and drain covers. A proper SUV would be smoother, but the Hilux is a reasonably appealing prospect for long journeys and does a good job of insulating you from potholes.

You won’t be seeking out a winding B-road, though – there’s too much body lean and not enough grip when cornering for the Toyota to be genuinely enjoyable – but, overall, it’s competent and reassuring to drive. We did find the back end jiggled about a little when the load bay was empty, though. This is a result of the suspension being set up to support a serious amount of weight and is a common characteristic of most pickup trucks. 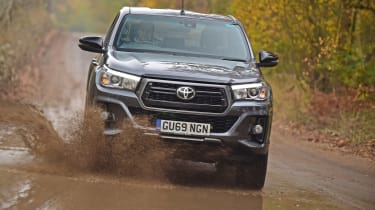 The 2.4-litre diesel engine fitted to the Hilux has 148bhp. That may not sound like much, but it actually has plenty of pulling power – enough to haul a 3,200kg load using the tow bar or carry up to 1,120kg in the load bed. The Nissan Navara has more power and is a little faster, but the Hilux will be swift enough for most. Acceleration from 0-62mph takes 13.2 seconds with the manual gearbox and 12.7 seconds with the automatic. As mentioned earlier, we’d recommend saving £1,500 by choosing the manual – it’s smooth and makes the Hilux more economical, too. The top speed for both is 105mph.