Again, expectations are key here: think of the Toyota Hilux as a commercial vehicle and you’ll be impressed by its interior 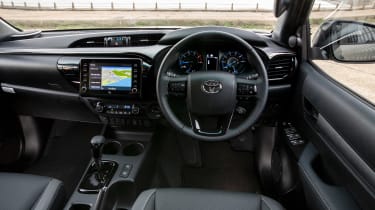 Pickup trucks tend to have a hard life, and many Toyota Hilux owners will use their cars to carry tools and colleagues to building sites, while it’s also a popular choice for farmers and woodsmen. This means it needs to be tough, with the carpets and seats standing up to work boots and mud, while the switches need to be similarly robust and long-lasting.

Despite this design brief, the Hilux feels pretty sophisticated inside. True, some of the plastics used feel scratchier and more brittle than those found in comparable passenger cars, but the overall impression is that you’re sitting in a car rather than a truck. All Hiluxes (save the entry-level Active model) feature Toyota’s Touch 2 infotainment touchscreen. This has a seven-inch display and is pretty decent to use, but it remains to be seen how it’ll deal with grimy gloves and the inevitable knocks a working vehicle experiences during its day-to-day life.

The Hilux is offered in four trim levels. If you want the Single or Extra Cab, you’re limited to the entry-level Active specification. While this has automatic wipers and lights, Bluetooth connectivity, air-conditioning and controls on the steering wheel for the stereo, it also gets Toyota Safety Sense as standard, which includes lane departure warning, road sign assist, pre-collision alert and adaptive cruise control.

Spending around £4,000 or so extra gets you the four-door, five-seat Double Cab and Icon trim, which includes these features as well as 17-inch alloy wheels, the Touch 2 infotainment system, a leather steering wheel, DAB radio, tinted rear windows and power-folding door mirrors. 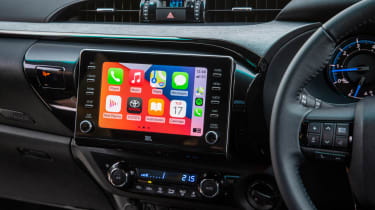 A further £2,000 or so gets you the Invincible model, which comes with 18-inch alloy wheels, LED headlights and tail lights, all round parking sensors, keyless entry and go, heated front seats and automatic climate control. Spend roughly £4,000 more on the Invincible X model and the Hilux gets unique body styling with minimalist chrome detailing and black painted 18-inch alloy wheels. Interior upgrades include leather-trimmed seats (heated in the front), along with ambient lighting in the door cards and a premium nine-speaker JBL stereo system.

If you’re going for the basic Active spec, spending an extra £500 (before VAT) on all-round parking sensors may seem like a lot of money, but you’re likely to be grateful for the addition when reversing a fully-laden Hilux. A (near-essential) tow bar will set you back between £599 and £699 depending on whether you want seven or 13-pin electrics and a securing ball and pin.

Depending on what you’re using the Hilux for, you may want to invest in some of Toyota’s load-bay extras. A full-height ‘leisure hard top’ will set you back roughly £1,500 with the Double Cab model, while an aluminium roll cover comes in at about £1,400. If you want to protect the load bay from getting scraped and dented, an aluminium liner is a shade under £750. Note that on all models, an alarm is optional rather than standard.