Toyota is a solid performer when it comes to reliability, with the brand coming sixth out of 30 manufacturers in our 2020 Driver Power owner satisfaction survey. Toyota’s hybrid powertrains come with a reputation for rarely going wrong, and the RAV4 came an impressive 12th out of the top 75 cars in Driver Power, with a high rating for build quality and reliability. A reasonably low 11.5% of owners reported a fault within the first 12 months. 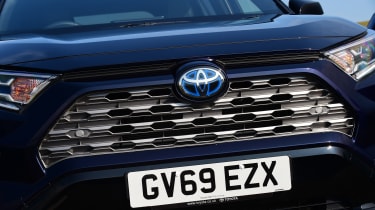 Owners were also impressed by Toyota’s aftercare and servicing, with its dealers finishing third out of 25 brands in our 2020 Driver Power dealer survey.

The RAV4 was awarded the full five stars by Euro NCAP after safety testing in the spring of 2019. That was thanks in part to an upgrade to the second generation of Toyota Safety Sense for the latest model, a suite of technology  that includes autonomous emergency braking that can detect pedestrians at day or night, and cyclists in daylight. Its adaptive cruise control has been tweaked for smoother acceleration and deceleration in traffic, bringing the car to a halt when necessary.