A fun chassis and smooth performance in town

The RAV4 sits on Toyota’s New Global Architecture (TGNA) platform, which is also used in the Toyota Prius, C-HR and Corolla models. It brings big benefits in ride and handling, with more sophisticated suspension than the old model, so the RAV4 is capable of turning into corners with a surprising amount of vigour and poise, with plenty of grip while resisting dramatic levels of body lean.

Every version is powered by a 2.5-litre four-cylinder petrol engine along with an electric motor and a battery. This combination makes performance reasonably brisk, with both 215bhp in the front-wheel drive version and 219bhp in the four-wheel drive serving up 0-62mph times of 8.4 and 8.1 seconds respectively, which are competitive for the class. 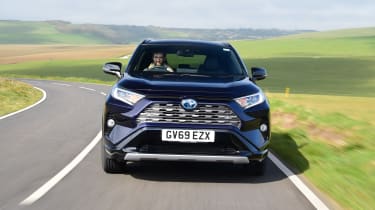 Most drivers won't be able to tell the difference on road, so we'd recommend sticking with the two-wheel drive version unless you live in an area with particularly harsh winters or lots of dirt tracks.

Despite the stats, the hybrid powertrain means the RAV4 is unlikely to satisfy enthusiastic drivers in the way a Ford Kuga or Mazda CX-5 can. That's because its design and CVT gearbox mean you feel a little detached from the action at times. The steering is precise and has a decent weight but the RAV4 is more about comfort than thrills.

It offers an excellent level of refinement when compared to its rivals and while rougher road surfaces are noticeable, they have minimal impact on the well-insulated interior. A town environment is where the RAV4 is at its best, though, with the whirring electric motor barely audible at lower speeds. This makes it a relaxed car to drive, with the engine shutting off entirely when stationary in traffic. 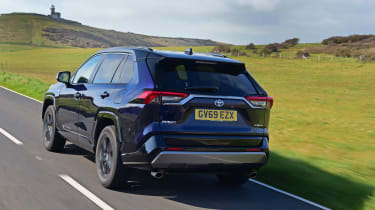 When the 2.5-litre petrol engine starts up, it can be a bit noisy. During our test, the engine did occasionally come on to charge the battery while the car was stopped. If you push the accelerator hard, the engine will fire up sending the revs high to help you gain momentum.

At motorway cruising speeds, the RAV4 settles into a quiet hum, with the wing mirrors creating a small amount of wind noise to go with a small amount of tyre roar. At higher speeds, the well-tuned chassis does a great job of soaking up bumps and road imperfections, even with larger 18-inch alloy wheels fitted to our Dynamic spec test car.