The Toyota RAV4 name has been with us since the mid-1990s. It was one of the first compact SUVs to combine really car-like driving manners with the adventurous look of an off-roader. From the outset, Toyota realised that such cars are likely to spend far more time on tarmac than tricky terrain, so the RAV4 was developed with the road very much in mind.

Today, many other manufacturers have cottoned on to the RAV4's winning formula and the rival Nissan Qashqai and Renault Kadjar both join the Toyota in offering front-wheel drive as a more fuel-efficient alternative to four-wheel drive. The Peugeot 3008, meanwhile, eschews all-wheel drive altogether.

The RAV4 has grown considerably since its original incarnation and now has all the interior space and luggage capacity an average family could ask for – although this has come at the expense of losing much of the driver-pleasing agility it was once known for. Enthusiasts might find this disappointing, but families will welcome the Toyota's comfortable drive.

The 2.0-litre petrol model isn't all that economical, but there's also a powerful 2.5-litre petrol hybrid, which is claimed to return up to 50mpg and still has four-wheel drive available on demand.

Toyota's excellent reputation for reliability and customer service makes RAV4 ownership an attractive proposition; it finished in an excellent fourth place out of 75 cars covered in our 2017 Driver Power owner satisfaction survey, but dropped to 51st out of 75 in our 2018 survey. Toyota's five-year/100,000-mile warranty is one of the most generous on the market, too – Hyundai only beats it by offering unlimited mileage, while Kia's warranty lasts for seven years while having the same 100,000-mile limit. 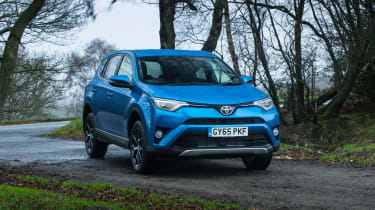 Trim levels start with Icon, which is only offered with the hybrid powertrain. It gets a seven-inch touchscreen infotainment system, DAB radio, 17-inch alloy wheels, hill-start assistance, cruise control, a reversing camera and dual-zone air-conditioning, which is quite impressive. Icon Tech adds sat nav, while Design models also have LED headlamps, an Alcantara suede finish on the dashboard and doors, plus heated front seats (the driver's being power-adjustable).

While it’s more practical than ever before, the RAV4 has lost its mantle of being the most fun small SUV to drive, with rivals like the Ford Kuga and Mazda CX-5 being more responsive and car-like. Other alternatives include relative newcomers like the Hyundai Tucson and the Mitsubishi Outlander.

We reckon the best all-rounder is the Icon Tech trim, which has plenty of kit to make it comfortable and easy to live with. However, if you’re looking specifically at the petrol-engined models, the 2.0-litre V-matic is only offered in Design and Excel trims.