The Toyota RAV4 is a comfortable cruiser, but there are sportier SUVs available

Unlike the original RAV4, which was said to be as fun to drive as a sporty hatchback, the latest model is best suited to relaxed cruising. Even with its 'Sport' mode selected to firm up the vague steering, the Toyota RAV4 isn’t as satisfying to drive as a Ford Kuga or Mazda CX-5. Instead, it’s best considered as a comfortable family car. There are two engines to choose from in the RAV4: a petrol and a petrol-electric hybrid, both of which are automatic-only. 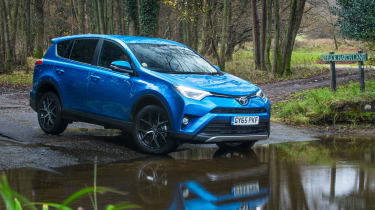 There's only one pure petrol engine in the range and it's the slower of the two. The official figures have this RAV4 going from 0-62mph in 10.7 seconds and it also feels less urgent than the hybrid in day-to-day driving. This is partly due to the fact it's only available with Toyota's MDS Continuously Variable Transmission (CVT) automatic gearbox.

The RAV4 hybrid is the only engine where you have a choice of front or four-wheel drive. While the former is slightly more fuel-efficient, there's no difference in performance: both get the car from 0-62mph in 8.4 seconds (the fastest in the range) and top out at 112mph. Be aware that the hybrid model has by far and away the worst handling of the pair – the extra 175kg mass of the hybrid system makes the car cumbersome in corners and grip runs out much more quickly. The CVT gearbox is noisy and makes acceleration feel sluggish.