The current generation of the Toyota RAV4 is proving to have a solid reliability record. It’s also a safe car, with excellent crash-test results and a decent amount of safety kit.

The Toyota RAV4 was rated highly for reliability in our 2017 Driver Power owner satisfaction survey of cars currently on sale in the UK. Of the owners who responded, just 6.25% reported experiencing a problem with their car at least once. This may not come as a surprise given Toyota’s reputation for building reliable cars, not to mention its position as one of the biggest car manufacturers in the world. 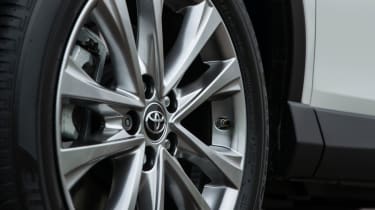 As this car is so popular with families, safety is particularly important. Luckily, the RAV4 doesn’t disappoint, having been awarded the maximum of five stars in the Euro NCAP crash tests. It was rated at 89% for adult occupant protection and 82% for child occupant protection – figures that are very good, but still slightly behind the Mazda CX-5’s 94% and 87%.

All versions come with technology to improve braking and help prevent skids, multiple airbags, ISOFIX child-seat mounts and childproof locks. Hill-start assistance makes it easy to set off when parked on a slope, a feature that’ll also come in handy if you plan to use your RAV4 for towing

Top-of-the-range Excel cars offer blind-spot monitoring as standard. This watches your side and rear blind spots when you indicate to change lanes on the motorway, sounding an alarm if it spots a vehicle. It also adds a rear cross-traffic alert, which helps to monitor blind spots when reversing out of a driveway or parking space.