"The Vauxhall Crossland X is practical and comfortable, but it’s let down by an underwhelming driving experience"

The Crossland X is actually only slightly smaller than the now-discontinued Vauxhall Mokka X, standing 6cm shorter and 2cm wider, and it makes the very most of its interior space. It competes against a broad range of rivals including the Renault Captur, Peugeot 2008, Skoda Kamiq, and SEAT Arona. While it's a little more expensive than some rivals, it does boast a very generous standard equipment list, making it good value. 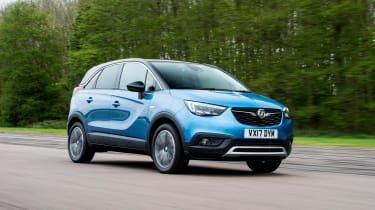 Looks-wise, it doesn't particularly convince as an SUV, though – despite Vauxhall claiming the Crossland X is an SUV, there are definite shades of people-carrier to it. Indeed, it’s not hard to see it as the Vauxhall Meriva replacement it really is – especially if you imagine the pieces of black plastic trim at the bottom of its doors are body-coloured. Still, the Crossland X comes with a range of reasonably frugal petrol and diesel engines, has comfortable seats, excellent interior proportions and an easy-to-use dashboard.

Compared to its immediate rivals, the Crossland X is a little sharper to drive than the Citroen C4 Cactus, but not as enjoyable as the Peugeot 2008. It also falls quite a long way short of either for ride quality – undulating roads can cause the Vauxhall to feel bouncy and unsettled. Any prominent side winds that present themselves, meanwhile, can cause more buffeting than is ideal on exposed motorways.

The 1.2-litre three-cylinder turbocharged petrol engine – which produces either 108 or 128bhp – is gutsy and easy to recommend, while the 1.5-litre diesel Vauxhall offers with the Crossland X is also a decent performer; other positives include a generous list of standard equipment, an excellent infotainment system and a decent boot. 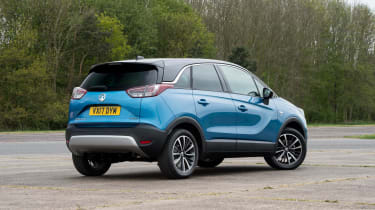 You sit reasonably high in the Crossland X compared to a conventional hatchback and the windscreen is large, so forward visibility is excellent. The rear is also easy to see out of, save for fairly significant blind spots created by the wide pillars between the rear doors and the boot; these mean you need to take extra care when changing lanes on the motorway. You can’t get blind-spot monitoring on the Crossland X, either.

Too few Crossland X owners took part in our 2020 Driver Power ownership survey for us to rank its reliability. However, it does share its platform and a number of internal parts with the previous-generation Peugeot 2008, which finished 35th out of 75 cars in our survey.

The Vauxhall was awarded a five-star Euro NCAP score when it was tested in 2017.