To tempt customers away from the usual upmarket suspects, the Arteon needs to offer some appeal to driving enthusiasts, and Volkswagen has done a decent job of maintaining a balance between sharpness and comfort. The car still lags behind a BMW in terms of driver appeal due to rather numb steering, but the DSG automatic gearbox is smooth once underway, and a Sport mode is available with the optional adaptive dampers, minimising body roll without making the ride unacceptably firm. While the steering is rather lacking in feel and feedback, there’s no shortage of accuracy and this lends the Arteon an easy, agile feel.

Of the other modes, Normal is the default halfway-house between the Sport and occasionally floaty Comfort. Most of the time you'll want to have the car in Comfort, the mode in which the Arteon rides best, particularly on the motorway.

Generally, the Arteon is a terrifically smooth-riding car, even when huge 20-inch alloy wheels are fitted. Volkswagen has paid specific attention to the Arteon’s suspension settings and it certainly seems to have worked. The VW excels as a long-haul express cruiser, without completely lacking driver appeal when the road gets challenging.

In our experience, the Arteon’s brakes can feel a little grabby, meaning you’ll find it harder to control the brakes finely if you’re used to less aggressive systems. We also found that while the DSG dual-clutch automatic gearbox makes for smooth and seamless changes on the move, the system can cut in aggressively when manoeuvring at low speed and sometimes hesitates when you try and pull away while already rolling. 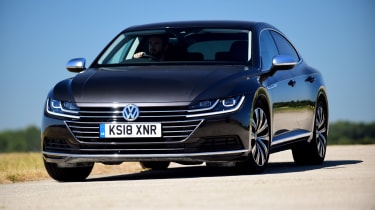 The Arteon really excels as a cruiser, which means the 148bhp turbocharged 2.0-litre diesel suits the car very well. Its 0-62mph time of 9.4 seconds is slower than that of the entry-level petrol engine but it has more pulling power for overtaking and ticks over effortlessly at motorway speeds. With 187bhp the 0-62mph time drops to 8.3 seconds, or 7.8 seconds with an automatic gearbox and four-wheel drive fitted.

The range-topping diesel engine is a 2.0-litre twin-turbocharged four-cylinder with 237bhp. It manages 0-62mph in just 6.5 seconds and its strong pulling power is even more pronounced from a standing start, thanks to the standard 4MOTION four-wheel-drive system.

4MOTION lends a real sensation that the car is being pushed, as well as pulled, out of corners, and boosts driver confidence more than the slightly lifeless steering can manage on its own.

With a 187bhp turbocharged 2.0-litre engine, the Arteon is capable of 0-62mph in 7.7 seconds and a top speed of 149mph. This will be more than enough power for most buyers, delivering plenty of acceleration and serene pace on the motorway.

If you want an Arteon with truly eye-opening power, Volkswagen offers a 268bhp version of the turbocharged 2.0-litre petrol engine, which propels the car from 0-62mph in 5.6 seconds. It comes with VW's 4MOTION four-wheel-drive system as standard.