Despite svelte looks, the Volkswagen Arteon has interior and luggage space in abundance

The Arteon has grown significantly larger than its Volkswagen CC predecessor, as well as the Volkswagen Passat with which it shares underpinnings. It’s also bigger than the Audi A5 Sportback and BMW 4 Series Gran Coupe. This extra scale has been successfully disguised by the Arteon’s flowing lines, while its long wheelbase allows a far more spacious interior than you might expect. 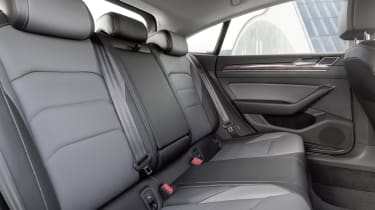 Whether you occupy a seat in the front or back, you’re bound to find enough space to get comfortable. The seating position in the front is very much like that of the Passat, which means plenty of room for feet, knees, legs and hips for all but the very tallest. With lots of adjustment in the steering wheel and seats (which are part-electric on Elegance and R-Line), finding a comfortable position is easy.

Those in the rear are far from hard done by, though – there’s an impressive amount of kneeroom and thanks to the clever way the roof is curved, far more headroom than the Arteon’s slinky outline would suggest. Only by viewing the Arteon directly side-on can you see where this headroom has come from – the bulbous curves that allow it are disguised from other angles.

The rear bench itself clearly prioritises those in the outer two seats – these are contoured to give the impression of individual buckets and are rather more figure-hugging than the comparatively flat central perch. 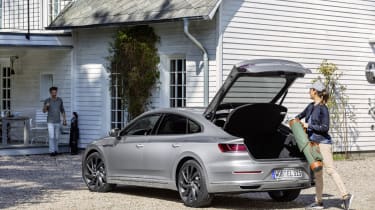 The Arteon’s curvy styling also successfully incorporates a sizeable boot – at 563 litres, it’s only 87 litres smaller than that of the rather more square-cut Volkswagen Passat. It’s also rather more generous than the BMW 4 Series Gran Coupe or Audi A5 Sportback, both of which can only muster 480 litres.

The Arteon and A5 also have the advantage of a hatchback tailgate, which unlocks a huge luggage area when the rear seats are folded flat. Although BMW also offers folding seats, its saloon layout is far less flexible, especially if you have a bulky item to shift.